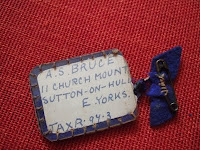 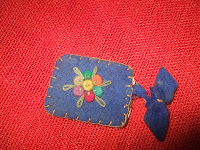 Aunty Alice had to wear this homemade ID tag all during the 1939-45 war in case her body had to be identified.

Brown paper strips were still stuck to the pantry window even in 1986 when she died and the house was sold.
An incendiary bomb did once land on the huge communal front lawn *and so as all the glass in the house was shattered and  had to be repaired, the family- Grandpa , Grandma, unable to walk  since 1930, Aunty Alice , spinster of the Parish , housekeeper, carer, cook and chief bottle washer,  were all evacuated to Market Weighton to the vicarage to sit out the war, but they did  return after a few months to Sutton.  My father worked for Hull Corporation Telephones and spent the war fire watching in Sutton at night having worked all day cycling round the docks doing telecommunication type things and hoping not to set off unexploded bombs  with the vibration of the bike. The air raid shelter was a reinforced dining room , as grandma was not mobile. My whole early years were coloured by stories of the war in Hull, and more especially its effect on a household.It was always drummed in to me that Hull was only ever called 'a city on the East Coast' and that a wider world just had no idea of the devastation.

Have looked at these 2 sites and cannot verify the heresay from my Aunt, (who died 1986) Will talk to aged parent (91) tomorrow and see if she knows where the bomb dropped. She is all there and half way back and will remember what she was told. She , born in Birkenhead , spent most  of her war in the WAAF in Gloucestershire and Worcestershire and married my father in 1946.


Mother said that there was a bomb and bomb blast. The family of Grandma, Grandpa and Aunty Alice did indeed go to Market Weighton for over a year. Father remained at Church Mount,and the maid was kept on to keep the house  clean and presumably do laundry . She did not live in , but came in every day. Father was in charge of the Sutton Telephone Exchange(corner of Holderness Road and Mayberry Ave). In the evenings he had to Fire Watch at the docks, and keep the telecommunications going on Ships.

HULL CITY OF CULTURE -ALWAYS HAS BEEN