Yorkshire Fog and the death of Botany

The grasses are all at their very best .
I have struggled to identify them all my  life. It's because I'm a lazy botanist . I know how to use keys, was trained to use  CTW* 50 years ago . Two  years ago , training again and updating my skills , am now au fait with Stace's New Flora of the British Isles and Roses The Wildflower Key . I know now that Fabiaceae is the new name of Leguminosae, but does it really matter?

Taxonomic Botany , the Science of classifying and naming plants is now so high tech that it has largely been replaced in Academia by Genetics, and Biotechnology . Sometimes only DNA testing will name a species correctly(Water Crowfoot for example) as it fits in with the Data Bases of the present. New species and sub species,  and plant families are being discovered daily. The scientific journals of the BSBI were always very difficult to understand in the 70s when I first joined, but now I only look at the coloured pictures! 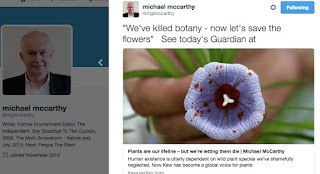 Where does intuitive botanizing come into the identification processes? I am concerned that the Discipline called Botany, now no longer exists in any UK university . The first Oxford professor of Botany was awarded his chair in 1669. In 2013 the last undergraduates in Botany finished their course and graduated. (Bristol).
I was sent an article from the Guardian by my friend Win in Hove. So I have been giving much thought to Whats In a name. and how do you know .
Michael McCarthy writes that
'It is possible to complete a degree in Plant Sciences , without being able to identify a single British Wild Flower"

This lazy botanist is having to use Plant Keys from time to time with grasses, as my intuition just fails. I am grateful for the newly published book from The Species Recovery Trust , A Field Guide to Grasses, Sedges and Rushes. Its a picture book with key facts. I have been very anxious about Yorkshire Fog . My NPMS **Km Square includes Rocket Pole Field in Filey .which is nearly ALL grasses. I only have to record Indicator species . *** I have to get it right . BUT I am doing my best .

When Jack Whitehead an expert local naturalist , and his colleagues , post pictures on the definitive Filey Nature Facebook pages they are using acquired knowledge through years of experience, as well as Floras, to go
through the identification processes. They use the delightful Common Names . What is more, they are publicising the species that we are thrilled to see in Filey .
And Never a day passes when a picture of the Common Spotted Orchid or the Pyramidal Orchid is posted on the ordinary Facebook accounts of Filey for us all to enjoy.
Here I stand with Michael McCarthy . It doesn't matter that Botany may have breathed its last, but the plants endure, and not only has Kew become a global voice for Plants and threats to species, but here in a little corner of North Yorkshire Plants have got friends . I hope that students in Filey will make the Orchids their starting point and learn the names of the local Flora by default . That is how I started, spending hours sitting by the rivers in North Yorkshire being quiet, as my father fished for Trout and Grayling, and looking up "Policemans Helmet "and insect names in to dispel the boredom .

And Policeman's Helmet ,  an Invasive plant species , so those like  Tim Burkinshaw, (far left  ), Biodiversity and Wetlands Officer for our local council**** are doing a great job raising awareness of its threat, and advising of ways to control it.

*Clapham, Tutin and Warburg.Flora of the British Isles
**National Plant Monitoring Scheme
*** Plants which indicate the integrity of a Habitat.
**** Scarborough Borough Council
Posted by Margaret Mary Rowling at Monday, June 27, 2016 No comments: 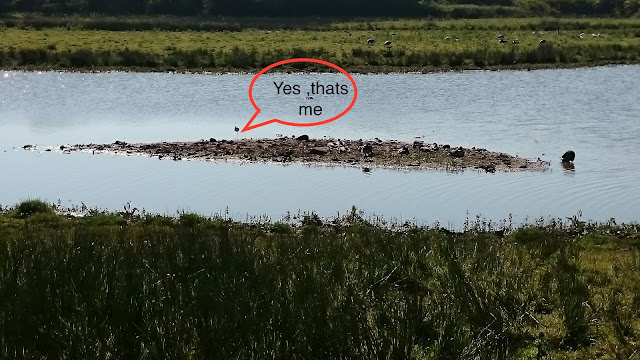 There is a dot on the island here. It is an avocet . I walked to Filey Dams and went in the hide and spotted it easily even with my 10x25mm Field 5.8 binoculars (whatever that means). If I had arrived an hour earlier , the bird would have been 10m away at other side of hide. I was however thrilled to see it from a distance , and thankful that the experienced birder already in the hide could point it out to me. Its only the second one I have ever seen as I am just a beginner birder. I have been trying to find my childhood copy of a paperback 'Birdwatching for beginners' Bruce Campbell 1952 but its gone . I've only got Malcolm Saville's 1946 'Seaside Scrap-book for Boys and Girls'. Those of us growing up when paper was scarce, had books  whose quality of paper  was deemed War Economy Standard . So we treasured the few books we had .
We were not bombarded with info , pictures , vids and musak and allaround colour in the 1950s. We had no TV in the day time except for the Woodentops et al  after lunch for 15 mins. It didn't seem a colourless world  , the hues were in our neighbourhoods, gardens  ,skies and geraniums , delphiniums , glace cherries ,Omo roses and tin buckets and spades. No wonder we all loved Hull Fair and Bonfire night , so much brash colour to look forward too. 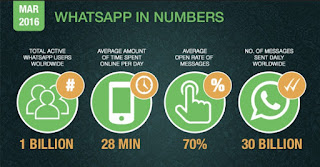 Now  Information Super Highways are called something else, every small child can use a smart phone for app amusement when Mum is chatting to a friend for real, instead of chatting to her friend online whilst small child gives up asking questions. Noise is everywhere, paper is so cheap that wrapped goods are the norm , and restaurants all have to give away colouring sheets and hats and the postman delivers useless adverts in high colour for Farm Foods when we don't have one within 10 miles. 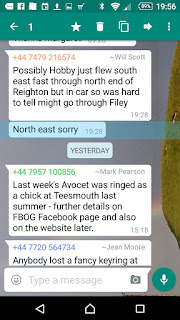 AND YET I AM VERY GRATEFUL FOR WHATS APP. This marvellous way of communicating with colour, pictures, vids, and the spoken word across the internet at little  cost is uniting not only families like mine instantly and inclusively. That is as  long as a smart phone is at both ends . AND Now it is working a treat for the Birders and Nature lovers of Filey . Not only was I alerted to the Avocet, but the last few weeks have also reported sightings of a Spoonbill, a Bluethroat, flocks of this and that passing through Filey , vast swarms of the Cabbage pest the Diamond Backed Moths, the fledging of the first House Martins and assorted Warblers . If there is one way to get me into birding big time its a message that something is at The Dams or on Carr Naze or East Lea . These messages are not from Twitchers , the train spotters of the Bird World , but of knowledgeable , interested enthusiasts , ecologists, who are not ticking off species but making valuable contributions to the Scientific Data of our Coast and training up the next generation . If only we could find a way of getting children and young people  to join FBOG or the Small Mammal Trapping Sessions  or get them out and about on the Country park with Field Glasses . A promise of cake and drink at the Country park Cafe might do it , but we need to wean them off their Roblox Studio, Minecraft and Xboxes for an hour or so.
A biologist friend of mine in Filey taking groups of Filey Schoolchildren on to the beach to look at Marine Life and seaweeds  was astonished to find that when asked , many of the children said they  had never been on the beach before .

Posted by Margaret Mary Rowling at Saturday, June 11, 2016 No comments: