Progress on my Hay Meadow

I was blown away by the info that at the National Botanic Gardens of Wales they are able to use DNA barcoding to determine the identity of the pollen and nectar that bees foraged for their honey making. In fact to widen all the scientific data, the NBGW is inviting beekeepers throughout the UK to send a sample of their honey for testing . I found this out by chance as I was watching last Fridays edition of BBC Gardeners World , see on iplayer Episode 15 of 2017. Of further and for me , and more important info, is that the preliminary results show that bees have a preference for UK Native hedgerow and woodland species . They prefer Hawthorn , Gorse and Dandelions , and of the cultivated plants like Peonies, Skimmias and Muscari. If ever there was a reason to let Dandelions grow on my Allotment that is it . I've watched scores of Bees on My Echium plants , now I think a few Gorse bushes need to be planted. (can also eat Gorse buds).and I'll not agonize over my Dandelions.

Last week I went on a training course in York for the National Plant Monitoring Scheme to learn more good practice for my Plant Surveys in Filey. In this hidden green heart of York are about 10 acres of woodland and meadow and a Study Centre. It is here that if I ever turn more of my allotment into a Hay meadow I could get Scything Lessons, but for now , on  my Meadow which is 1m by 5m I think a pair of shears will suffice . I never thought that what I'd read of in Lark Rise to Candleford  or Far from the madding Crowd could be a reality . My family think Im fast becoming even more of a nerd, and now that I have been given Jennys Spinning wheel and a bag of sheepswool I imagine that the idyll will be furthered by their dreading homespun scarves as well as hay filled pillows. Worry not family!

My own meadow is doing nicely , since I  seeded it in October last. I have to keep referring to the species list in the Seed Catalogue, and weed out all the self seeded weeds. Here the irony is not lost on me. Shepherds Purse, Sow thistles and Common Knotgrass are the main culprits and easy to spot and remove , though doing this takes a lot of time on my already precious time . All the grasses look the same to me as they are growing , I need a course on Grasses and Sedges alone . There is no sign of the Darling of the Hay Meadow , Yellow Rattle as yet, but I've done a belt and braces here and bought a couple a packets of it alone ,to re sow backend .  I shall be cutting my very own Hay Meadow in a week or too when the seeds are set .

Lots of the Nectar rich plants in the Seed mix are beginning to flower now so I can identify them . Ive let the masses of Scarlet Pimpernel remain as ground cover as next year it won't stand a chance except at the plot edges . Ive already spotted the Wild Carrot, Bird Foot Trefoil , Oxe-eye Daisy and Yarrow. Im secretly hoping for some Orchids to find their way to my meadow . Filey is full of them at the moment and not just in the secret places that Botanists keep to themselves, but on lay-bys near Primrose valley, behind Filey yacht club, and best of all in peoples lawns.

I was delighted when a friend messaged me to say she had spotted some in a neglected garden where the lawn was uncut . I took a trip up to look today, and was delighted to see them .The former owner of the garden would have been delighted too. If the house comes on the market the announcement should include that the lawn contained Wild Orchids . I would buy it . 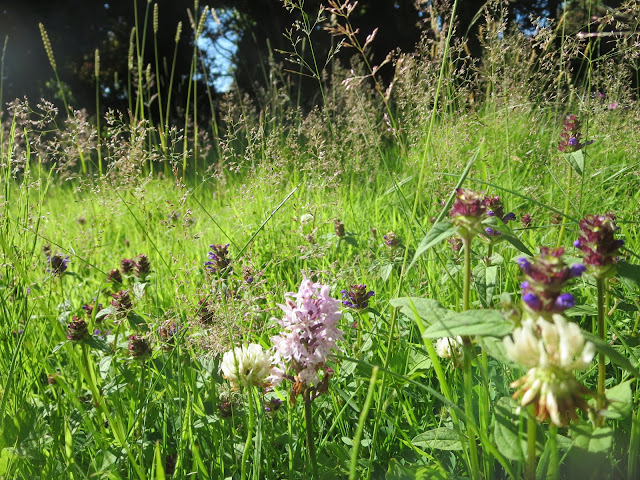 Posted by Margaret Mary Rowling at Sunday, July 02, 2017 No comments: