Our family parrot the much loved Polly died during the last war , not through old age , but because her diet of oranges and bananas was withdrawn and she would not eat the substitutes.
That is one of the few stories we Bruce children of the 50s were ever told of the  1939-45 WAR in Hull by our Grandfather. From our father and aunt we gleaned more,

We only heard random and seemingly trivial stuff, and now that I am in my riper years I wish I had  asked more questions. I blogged about this once before and can add little to my meagre knowledge .

This is not the case with friends in Filey . Joanne and Ian Cammish at Cammish Outdoors shop have plenty to tell .


The year was 1941 this was the year where Hull suffered the most bombing and night raids ,most nights in the early summer onwards the young Eddie Cammish of Filey was a fire man in Hull for the war effort at that time one Sunday night in particular he re counted to me that he had a 24 hour pass home ,as he left Filey for Hull walking up Station avenue(FILEY) the sky was already a light from the bombing that was to greet him on his arrival . As the train neared Hull the whole of Hull seemed to be ablaze, he went out of the front of the station many bombs had caused serious damage and bombs were raining down on him as he ran to the top of Spring Bank (Blundell’s yard) the fire station buildings were damaged too, his fellow officers shouted come on Eddie were off just now so he jumped on the engine as it took off. the scenes were of blasts and carnage all over their first job was a wholestreet that had been blown to bits, with a lonesome armsaluting
heavenwards ......There was no body attached ....all through the night the Salvation Army tea wagon stayed by their side as they tried to dig bodies out of the mayhem, constantly at their side offering support tea and sandwiches, and they didn’t leave till they were all done. Eddie would be very emotional when recounting these tales .he always donated to the Salvation Army; they were very dear to his heart.

My friend Mick Corner who grew up in Beverley tells another story of the Hull Blitz. He tells of relations who lived in the Boulevard, and being completely bombed out set out to walk to Beverley but were turned back from doing so( as road blocks contained the city -my understanding). The family did find a way out and turned up at Beverley with nothing but the clothes they stood up in , and covered in black soot.

Ive blogged about this today as I was so moved by the MADE IN HULL installation and light show in Queen Victoria Square . 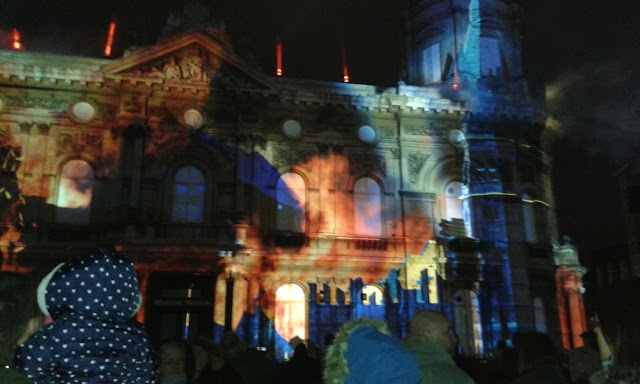 Posted by Margaret Mary Rowling at Wednesday, January 11, 2017 No comments: