The first of occasional blog posts ,  a contribution to the preparations of my home city as it becomes
the UK City of Culture 2017

I'm going to be kind about Kingston upon Hull. The City of Culture for 2017 is just my favourite City north of the Humber , west of Leeds and south of Newcastle. I have known it for 68 years and 8 months and 17days. I love its potential and I love its blatant  cheek. Its so needs to be City of Culture 2017 and most of all its people  need to stop complaining about the City Council, the fat Cats owning derelict land, the state of Edwin Davis's, the bad Town planning of the 1960s and 70s and just RISE ABOVE IT and start being positive.

I've been watching the billboarding as one comes into Paragon from all other stations in the country. There we have it. For like Bristol and Oban one can only go into Kingston on Hull on the train . The Scarborough to Sheffield train goes into Hull and out again . A hundred and 20 years ago Hull was a thoroughfare for migrants from Baltic States, and  my own economic migrant Great Grandfather,  Benjamin John Elder Bruce . Having been Chief Waterworks Engineer for the City of Hull in the 1870s he  took all his large family to New York in the 1890s, with the exception of my grandfather who was an Engineer on Wilson line .(Later Ellerman Wilson Line). The platform for Migrants travelling through Hull to Liverpool is still there at Paragon Station. 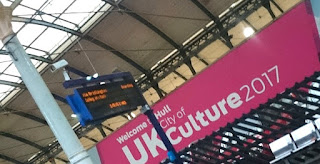 My credentials and right to speak -
I left home as soon as I could,   and went alone to work in London , getting a flat with a girl from college who I barely knew , and worked , married and lived there for years . A City of Culture I really know about , I return to the Capital as often as I can . I know what Kingston upon Hull could be as a Culture Hub. London it will never be, why would anyone want it to be something its not ? Its a unique , historic, gutsy city, and I'm going  to give it some encouragement of of my own  over the next 13 months  before 2017.