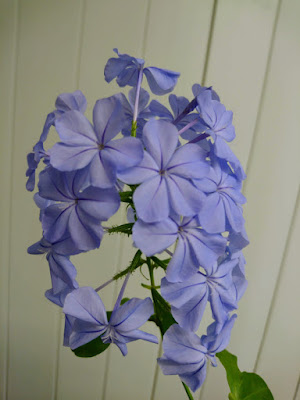 Spouse and I have many favourite plants, and often because they trigger good memories. Aunty Mary Jacobs , my grandmother's cousin used to stay with us several times a year for 3 weeks at a time , just to give her daughter a break . Nothing unusual in this , its known now as respite care, but in this case Aunty Mary was in her late 90s and her daughter still working .These times are well remembered by our  3 children , who were all under 10 at the time. Aunty Mary did not have Dementia, she was just frail and very deaf and joined in with all we did , and especially loved trips to gardens, where we would push her in a borrowed wheelchair . (Sheffield Park was horrendous in those days as all the paths were gravel).

We have never forgotten that , she recounted her story of being sent to get over the death of her twins after 10 days of life , and later that of her husband in France in 1916, to stay with her brother William Collier who lived in South America. She told of the long voyage , and all she did after travelling from Buenos Aires to Montevideo.
We have tried to grow Plumbagos ever since as they take easily from cuttings. This year spouse is thrilled that one is in full flower . I have the mother plant in my greenhouse on my plot , it has buds, but the one on the kitchen table only 30 cm high is away first .Its an airy sprawling delicate shrub and likes warmth and light shade, just like our kitchen table then . I can't move the mother plant outside into the shade on my plot as its too windy in Filey . It will have to be protected anyway from the cold and frost and will soon be too big to move . A Greenhouse at Burton Agnes Hall has a huge one occupying a  full  10m wall .

I grow Livingstone Daisies , except this year, when I just did not have enough window sills in the cottage for them in March . The reason I love them - they remind me of childhood holidays in Sutton on Sea in Lincolnshire where they were bedded out on the bank behind our Beach hut. They open to the sun , so I think our fortnights holiday must have had sunshine every year for me to remember them . I had to dead head them last year on my plot where I put them to edge  a bed. I'm sure that the municipal gardeners of Lincolnshire just left them and they were always spectacular , nothing else on the bank , just the daisies.

Uncle Whitfield in Skeffling introduced me to Nasturtiums in the 1950s. I knew that every year they would be there in the summer , taking over the whole of the bed by his chickens at the back of his house. I love the smell, the different colours that appear, and their sheer profusion in a piece of garden with poor soil . I know my allotment partner doesn't like the way I let them self seed all over my plot and they have spread to his part . I'm always finding heaps of them pulled out on his side. They are great for bringing pollinators to the allotment and make a great sacrificial plant for brassica pests like the Cabbage white caterpillar. I never have to sow them ,they just arrive, even in the greenhouse.

On the Filey allotments there are as many different plants grown as there are plots .  In my mind there are hundreds of plants I've loved just because I've seen them grow , some are familiar friends like Potatoes,  grown in my childhood garden . Mother would send one of us out to lift some  for lunch. Geraniums and tomatoes , smells of my grandfathers greenhouse in Sutton, and the memory of green tomatoes ripening on the window sills in September. I always hated Kale , or rather   the way my Mother cooked it , done to death in lots of water . I am growing to like the Kalettes , which I grow , a cross between sprouts and kale.

Every July around the 29th, my Wedding Anniversary , 46 years this year,   we drive 3miles on to the Wolds,  to see the wild Scabious, I grow that too on my plot , and my allotment partner has the large flowered Cultivated variety . I'm watching it , dead heading it , hopeful for a vase full for St Oswald's to celebrate our day. 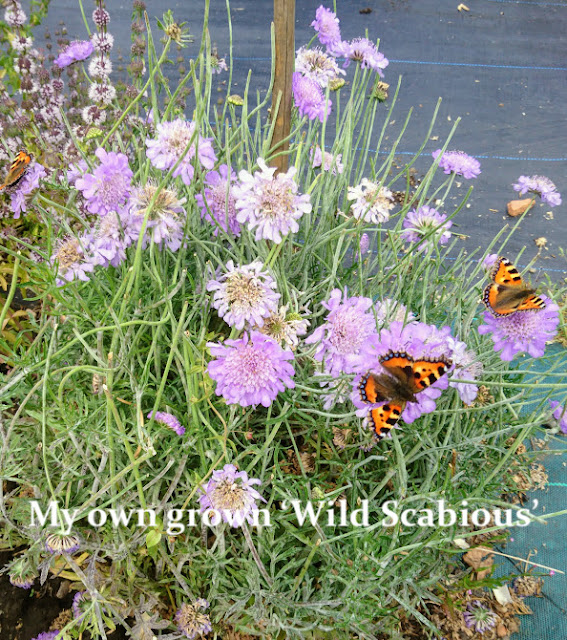