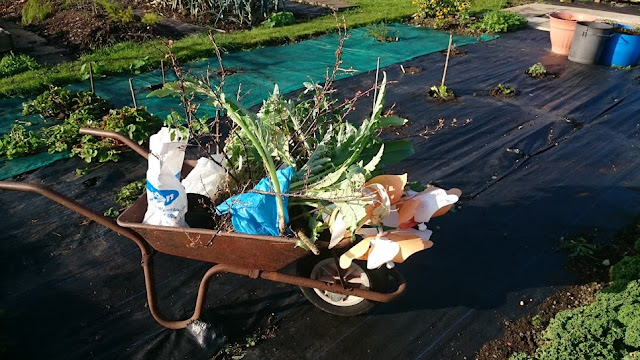 So I'm listening to my favourite and oh so dated 1955 recording of the Marriage of Figaro with the Glyndebourne Chorus and Orchestra, and principals Bruscantini, Sciutti and Wallace,Stevens and Calabrese. Of course I'm remembering all the times I went to Covent Garden in the 60s as guest of a colleague , and continued my Musical Appreciation and Education started in Hull. Music, aroma ,objects trouve , and more recently Facebook Groups of Old Photos all may spark some Happy or Sad remembrances from the recent or distant past . I look at pictures of the Locarno in Hull and the Gondola Club and can still feel the upset but relief that my parents wouldn't allow me to go to either . 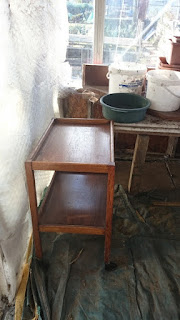 Last week Susanne offered me some plants from her allotment for mine , as she moves away from Filey to a huge garden . I have  a new Gooseberry Bush,  an intriguingly named Blackberry Sage (I think!); spouse enthused at my new neat bed of  Globe Artichokes , but loved more the Tea Trolley made by Susanne's Father in 1946 . I love it too as we had one just like it in Saltshouse Road during my childhood. Afternoon tea was wheeled into the lounge every Sunday . There would be bread and butter, sandwiches , maybe scones . maybe Flapjack , often cake and always a pot of Tea, a hot water jug , and china cups and saucers, never ever mugs, they were just for soup . Heavily embroidered tray cloths sat top and bottom, beautifully laundered and starched . Mother had some special ones of worked Lilacs made for her as a wedding present in 1946 . They dropped to bits eventually as post war fabric was very thin , not best linen , Mother would say . I wonder if my sisters remember those beautiful cloths, more embroidery than cloth .
My Grandparents also had an identical trolley which was wheeled from the breakfast room to the Sitting room (known as 'the Room') every single day . It was a long way along that dark hallway , and children were not allowed to wheel it on the bumpy floorboards. When my aunt became infirm in Old age she used to use the trolley to help her to walk .

#Hull 2017
My Hull sister reminded us of the exhibition in the  Hull Truck Theatre last week to accompany the  production of Janet Platers homage to the city's fighting spirit in Play 2 of the Hull trilogy, simply called Gaul   after the factory trawler FVGaul lost with all 36 hands in 1974. A fellow Hullensian living in Filey has written of her memories of the Gaul .

It brought back many memories as the first mate on the Gaul and his family lived in the same avenue as my parents..... I invited his father to Eastfield Junior School to talk to the children about his life at sea. They enjoyed it very much-so did he. I introduced him as Mr Spurgeon  and his friends called him 'Spud'!After the tragedy the headmistress invited Mrs Spurgeon to the school as a classroom assistant to perhaps take her mind off it a little.

I remember that in my Secondary School , Greatfield High School , (1959 to 65) we sometimes  had to stand for a minutes silence during Assembly as a mark of respect for a former pupil who would have died at sea.

On all counts I see progress, and I'm not talking about the fiasco that is called the PresidentialElections in the USA, which is certainly progressing into a Feydeau Farce , except it is REAL! I agree with Bishop Baines here, a SHAMBLES it is !

I prefer PROGRESS of the positive kind.

I was planting a few Wallflowers in front of your Blackcurrant bushes, and weeding so that I won't let you down by a lack of tidiness on the border next to Brian's Rhubarb. You never told me about your Woodmouse. I must have disturbed her.  She kept us all interested as we quietly watched her for half an hour until she went home when we had turned to look at the Comfrey bed. The family had all arrived to inspect my new allotment  , where I am steward, and you were creator. Small boys , though I wont be able to say that for much longer , as Zak is as Tall as me now, and Reuben as verbal . They ran round the plot , up and down all the paths, saying it was brilliant, and we could have a Barbie, and the sheds are amazing . Their Dad gave them a lecture on health and safety and railway lines , and their Mum sat in one of your plastic chairs on the shed base you constructed. She was glad to sit and see their Grandmother was absorbed and occupied and their Grandfather more than happy to walk slowly to the site  and look at the view and make tea.

Ive done quite a bit in my haphazard and yet planned manner. One bed is already sporting a 2" growth of Phacelia. It didn't rain at all for the first 12 days of my tenure. I had the pleasure of walking every evening and watering . I even had to fill the baths up , never done that in October before.
Ive also planted a Wildflower Meadow in the bed next to the K**e .Two packets of Chiltern Seeds Special Pollen and Nectar Meadow Mixture only covered half the bed. Ive measured it now , 8 square metres, so have bought another 2 packets  and 2 packets of extra Yellow Rattle.  I'm not going to buy a Scythe or take the scything lessons I saw advertised in the Summer Edition of the Plantlife Magazine , but i'll manage my Meadow according to HRH guidelines but I'm calling it a Micro Meadow.

I might ditch the Strawberries Dave! The ones on the ground I mean . I'm planning to grow more Dye Plants . The Irton manure man  John and his wife , have said I may have the wool from their Soay Sheep , and though I know it wont need to be dyed, it will get me into Spinning again  . Here I admit it was nearly 50 years since I last used a Spinning Wheel , I am planning to buy one and take lessons . Eventually !Eventually! Eventually ! I do plan to have all my Dye plants ready for when I'm proficient again and have bought in white fleece .

I'm hoping to keep my new plot in the pristine order you left it. I've tidied up my other tiny plot next door . I've finished the last 2016 cut of your Comfrey bed and tipped it into my barrel of fertiliser soup  . Im going to be very careful with the end of the plot near the Railway line and watch for MaresTail . As Bernard has managed to  mostly eradicate it from our joint plot, I will burn every bit that I see and make sure that the ground is covered to suppress it.

So best wishes to you and Jen, wherever in the world you are now. THANK YOU  for YOUR WONDERFUL PLOT!

The promise of Flowers #Hull2017

Last New Years Day I set out to record all the wildflowers IN FLOWER , and post the pics to BSBI Twitter using the hash tag #NewYearPlantHunt . It was great way to have an objective walk on the Country Park . I enjoyed it , but found few flowers. This little Speedwell being one of the 16 I found, a poor showing compared with some of the pics sent to Twitter, but the walk was still a delight as the Country Park was flooded and I spotted wading birds at close range , usually at the Dams or on the beach .

This coming New Year 2017 is already planned. Not able to go to Hull Fair this week I am thinking of what I have to look forward to . Half term is soon upon us, I've planted my onion sets , more leeks , a Wildflower Meadow (only 1 m by 4 m but  mine own), am about to wrap up the Echium and look for my winter berets. We've already had the log burner on in the evenings with the new supply of kiln dried Ash Logs from the Dalby Forest, and I will be making Parkin soon for Bonfire Night . I live on the coast but have not been on the actual beach once this year, time has just fugitted in a productive year of Allotment , Plant surveys and our active Social Life of hospital, doctors , another hospital, clinic, and chemists.
SO NEW YEAR 2017 is going to be GREAT.

One thing is certain . This New year I will be doing my New Year plant Hunt again and tweeting the pics with #NewYearPlantHunt . Ive already spotted the place with loads , right next to the Premier Inn 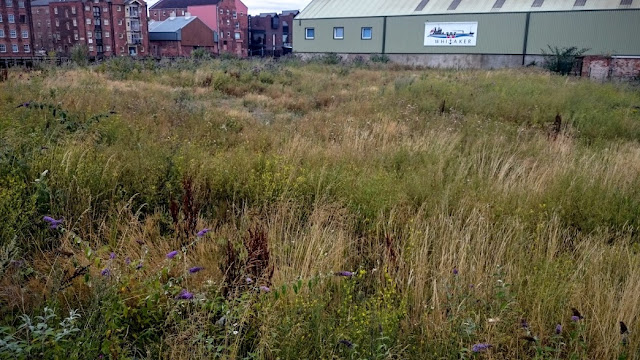 Posted by Margaret Mary Rowling at Thursday, October 13, 2016 No comments: