If you are a person who prays , please pray that the pigeon I accidentally allowed to hop in to St Oswalds Filey, hops out again in to the churchyard tomorrow. We have had to lock the doors on him for now as we finished decorating the church for that wonderful celebration Easter, the highlight of the Church year.(Update ,the pigeon did indeed hop out this morning .Deo Gracia.)
I am home now and listening to the Verdi Requiem on Radio 3, I love my Good Friday music, I had Part 1 of the Messiah at lunchtime when I had a quiet hour after going to the plot :
There I had  to collect greenery and cut all Barbara's Tulips and Daffodils from the plot next to me. She is always happy to give them to the Parish Church to use, and I'm very grateful. I had been asked to do an arrangement in yellow and blue to look natural and like the countryside in memory of the dear father of Liz who runs the Parish Office. My Cheshire sister who has been in Filey all week celebrating her imminent 70th birthday was commissioned by me to collect twigs. She brought an enormous bunch of sycamore, willow and beech twigs to me on Wednesday . They are the perfect symbol for Easter, as good as Eggs . I had a dilemma with the yellow part of the brief , as the 5 stems of Ranunculus I ordered were very small flowered . I should have ordered 20 stems. I wanted them to look like buttercups in the wild. I did pick masses of yellow flowered Woad from my Dye Bed. Daisy Dot *can have the rest , if it stands well and lasts and is yellow enough it could be a useful addition to the flower palette . I want to cut most of the flowers off as it seeds everywhere and I don't think there is much of a call for a lick of woad these days.

The gone to seed Kale flowers are in the arrangement as well . One year I did a splendid arrangement of cabbage leaves in St Os in late summer , all different shades of green . I came to water it the next day to find it had all been eaten by the  caterpillars I had overlooked on the undersides. I checked the Kale this time albeit early for Cabbage Whites. Today , gloriously sunny , my plot was full of Peacock Butterflies enjoying the rich nectar of the Wallflowers and Dandelions, Why do some gardeners so hate Dandelions?

I've not had much inclination to blog in the evenings  recently as I have been too tired or absorbed watching Hews Nursery on Utube.  In the mornings my head may be full of things which will make a riveting read but I often fall asleep as soon as I sit down after supper.

I have been going up to the plot nearly every day since January .Time stand still there. I set off as beloved is watching 'Neighbours' at lunchtime. In January when its dark early I'm only there a couple of hours, but as the days lengthen I get later and later. Here I explain that my allotment partner of 6 years has given up . I have now another piece of ground to cultivate so have been getting Bernard's plot into my NO DIG system  by covering every bit with cardboard and straw, and putting woodchip paths everywhere. I explain . The No Dig gardening system is just as its name , one doesn't dig . BUT neither does one walk on the beds, so they are narrow enough to garden from both sides, hence the paths. I did not have many perennial weeds to remove first , as Bernard was a meticulous ridder of Marestail and Couch grass. I am up and running now on my new piece of ground , most of my seeds in the greenhouse are seedlings and potted on , my Sweet Peas
are in , my Second Earlies and Main crop Potatoes are sitting happily under their straw on top of the wet cardboard, and I'm about to get planting the Climbing French beans in their modules. My hot beds are still hottish, and the trays of Tagetes will soon be hardened off. Tesco have theirs for sale already out the front of the Filey Store, but I always wait until Kathy at Filey pets and gardens has hers out .

Filey Parish has been supplied with Chrysanthemum' Blooms' for many years , lovingly grown by a member of the St Os congregation . Blooms are perfect for the Brass Vases at St Os as they may last for weeks. Peter gave me a few of his stock plants and I have grown them now for two years and am getting better at the routine. Peter is giving up growing so many , and several of us are trying to keep the supply going . This year I'm taking it more seriously and might even become proficient enough to grow blooms large enough to pass for Peters. I have bought some plugs from Thompson and Morgan and Beloved has potted them on for me to take up to the plot tomorrow for the greenhouse. We did as it said on the leaflet and brought them in at night whilst gradually hardening them off . The ones already in the greenhouse from the cuttings I took in January are looking good too, Peters progeny . I don't believe I just said all this . Five years ago I thought Chrysanths were the most boring plants on Gods earth after Begonias , but I am being seduced. 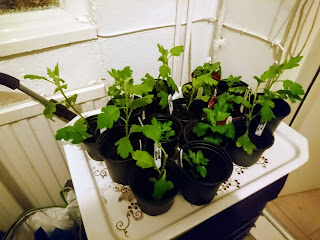