Its 10 years since I saw my first Banksy . It was in Israel 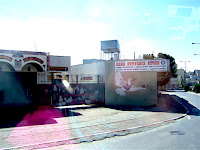 and was a definite political statement, and even from the coach window was recognisable. Ten years on and Banksy is very much main stream and market worthy . Now with a celebrity status even Secondary Schools deem the artist of note and encourage pupils to discover his work and appreciate it . One such is my grandson Reuben . When I told him about the Banksy on Scott Street Bridge, Kingston upon Hull, he asked if I would take him to see it.
We had a great day out from Filey , taking the train to Paragon is always good for boys who travel to school in a coach, and everywhere else by car . They however are both walkers ,every weekend they go for miles with their parents on the beach at Cayton, Scarborough and Hunmanby Gap , BELOVED  only slow strolls with the Sholley these days to get the paper, or collect his medication.He potters around quite happily without us, always spurred on by the prospect of Neighbours at lunchtime so we left him to hold the Filey Fort. 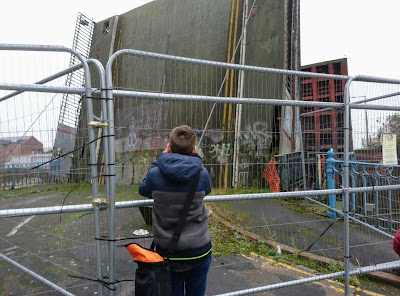 WE walked straight to the Banksy on Scott Street Bridge. Its not much of a sight now that its been vandalised, preserved and covered with perspex, as its lost its integrity . THE one in the war torn West Bank has more about it . I won't go on here about the lack of care of the Brits for the man made environment when the gift of a Banksy arrives. Its just as easy to say that any graf is destructive. 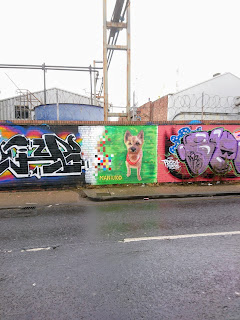 The Bankside Gallery has to be understood . Artists are provided with designated Permission Walls, which like everything may be abused, as in the Preston Road site, now probably gentrified up as another Gallery Site. I cant see any reason not to paint on derelict houses. HCC waits for years before seeing the housing needs, and finding money to renovate existing stock, the graf is a useful wake up call to a Labour Council .(IMO)
Reuben took lots of photos, he's good at that, .Zak hung around patiently asking intelligent questions. I Walked them to the great walls in Air Street , dodging huge lorries trying to park on the corner near the small graveyard. This all added to the urban feel, as Bankside is not a cosy Gallery with seats and the smell of freshly ground coffee around very corner. It is edgy and a small part of the day to day industry that is going on around it. Men in high vis jackets hang out the front of engineering plants and car yards enjoying a fag and a break . We saw no one else walking around looking at the paintings. WE  were the odd ones out . The spray canned ones fitted in mostly well, because we expect to see them in all cities, and railway sides, but we never expected them to be SO GOOD, SO CLEVER,SO DIFFERENT or SO INDIVIDUAL.The boys had their favourites obviously, MANUKO was a tag to look for, and this one was great!

Time for a drink , this grandma knows teenage boys have hollow legs, and their mother will be furious if I let them have fizzy drinks, so we had a very sober milk and sausage roll in the Kingston cafe. Its loo I must say , across a yard with a key was better than the Station Hotel, and a thousand times better than the station ones .
So we crossed Chapman street bridge and got the 10  bus to Queens Gardens.
The next part of the Art walk was for me a denouement . The pseudo Banksys are just that, PSUEDO. Boys liked them though , especially the Mary Poppins with the Lidl bag, which Zak spotted immediately . 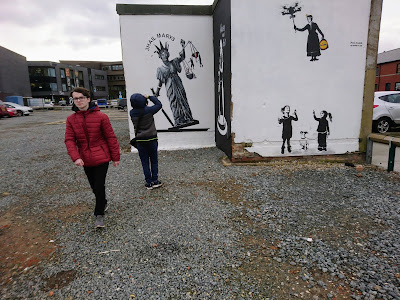 Time for a late lunch in the Omelette, still better than all the fancy new  places opening up , and home on the train  to the land that time forget , Geriatrica on Sea OKA Filey.
Saltaire next I think !

NB Ray . WE had the boys for the day as the parents were back at work and they did not go back to school until the next day . This was done on 7th Jan , Ive only just written it up.
Posted by Margaret Mary Rowling at Monday, January 28, 2019