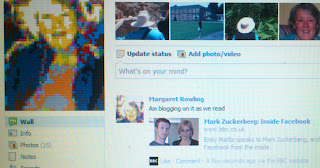 In our Parish there are people who would never have any thing to do with Facebook. Their children have been bullied, and facts misrepresented, and trouble caused as friends of friends of friends of friends post inappropriate lies and libels on the pages of their children.  In my family there are people who have deleted their Facebook accounts . I have been unfriended by my two of my godchildren. (For warning them about Facebook Tarot Cards and Horoscopes ) .Another friend asks on his status 'Do I let my father be my Facebook friend ? A teacher friend is alarmed because her pupils have tagged pictures of her taken at a School Prom.

So I watched with interest the programme on BBC2 last night about the uber uber  and ultra rich Mark Zuckerberg. Consequently I have been giving thought to all I gleaned that was new and implied from this measured insight into the Facebook phenomenon.
Anyone of my generation who has read books on the End Times for 40 years , did Brave New World for O level and has seen Soylent Green may keep an open and/or  suspicious mind about the Social Media anyway. My approach has been one of don't talk about something you know nothing about.
Unpacking that ;
Anyone with a bit of a brain will have realised that the altruism of the Facebook Site has changed. Over the years I have noticed that the adverts pertain to me. How do I know this? Simply because I have seen the pages of Family members and friends, which  contain adverts pertinent to them. In other words, it has always been obvious that  adverts for Beauty Products and Anti -ageing creams are targetted by age to the over 30s, 40, and 50s.  How  would Facebook know this ? Every detail put in Profile dialogue boxes  acts as a database to be accessed and used by those in marketing . Similarly , just by clicking the 'I am a Christian' I am nailing my Philosophy to the mast of the the World Ship and this I realise could be used against /for me if the End Times are nearer than we Hope/Fear.

So , what did I learn watching the rather dull and nerdish (and that is why he is taken so seriously) Mark Zuckerman  being interviewed by the clued up Emily?
Just this -be Careful and make sure YOUNG PEOPLE have lessons in unticking boxes. Who can help them? Well the Silver Surferse still have their uses, so use their expertise ! Isaiah 5:21