Putting the bubble wrap back

It has happened. I am sounding like my mother. Where did the Summer go? She always said that in September. I know that nights have drawn in, because I had a burn up in the incinerator as soon as it was dark yesterday, which was just after dinner, which was just after Neighbours.  I had a productive morning getting everything ready for the accountant  , and was able to finally throw away 2008/9 and bring 2009/10 out to thrill HMG s Tax Return . I love fires , and apart from smelling like an Anglo Saxon went to bed knowing my conflagration had robbed the Stig of the Dumps from accessing my old bank statements, Huge dividend notices( My  Fairtrade Acc netted 00.18p) and Pension notices. 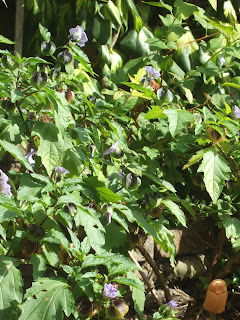 Here in Yorkshire we call it Back End in the garden.
I am trying to make my Sweet Peas last til Christmas as I did in 2007. I take off every flower, and dose regularly with Tomorite. The Runner beans have been good, but the Hurricane winds last week knocked them nearly over. I have had only 1 Tondo Courgette (round). The Chard has been good-my family are getting tired of Spinach and Rice Pie however.
I am ready to use Nicandra Physalodes for Christmas Decorations. Last year when it had dried out it looked great in a vase hung about with baubles and Chocs. They are all about 4'high now and about to turn brown. What a find they are. No need ever to even buy a packet of seeds.


C is thrilled as his Yucca is about to flower for the first time. He wants to know if it will die now. I think that's an urban Myth. 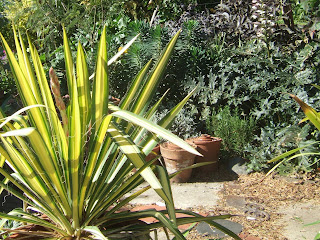 So the bubble wrap is about to go back in the greenhouse. The tomatoes were a disaster this year, so have been removed already. The grapes were made into wine in July. The Ipomeas all came out white and none blue. I should have  remembered all the F1 genetic talk I heard at school.
I am  ready to protect my precious Echium plants and try to get some through the winter.I will bring some in to the top of the house where it is light but cold and hope some will survive. The potted rest will go in the Greenhouse and the large E.pininana x wildpretii (about 15 of them)  will have to chance it in the garden. 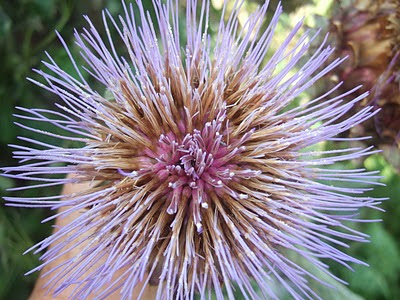 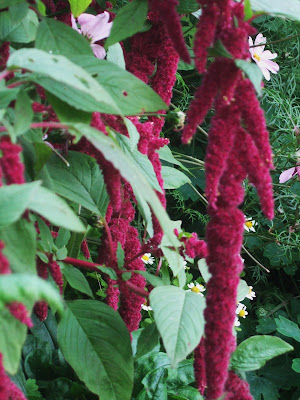