A walk up River

I was peeved that I actually clicked on one of those Facebook quiz things this morning  which resulted in a Word Cloud with MOST USED words. I had to delete it immediately as my most used word was HTML. The algorithm  used for the calculation did not know anything about me as I never use the abbreviation , let alone remember how to do coding without a handbook . I know that I am out of touch and old fashioned now. Blogging is not the new black , but it is my black. I don't want to be a vlogger and although my young grandsons are vlogging away hoping to earning millions I have put myself at last in a box saying CONTENT , IT SUITS ME. I'M not getting maudlin either. Ive just reached my three score years and ten  and a calm and satisfied Peace has descended upon me. I have reached that I shall wear purple and spit in the street stage.
I've not had time to share here recently , as Family Commitments  have come first , followed by my Sanctuary from them called the ALLOTMENT .

I completely muddled up my diary and so did not get to use my tickets for THE HYPOCRITE at the HULL TRUCK THEATRE , but did get to LA BOHEME at the Hull City Hall on the 21st March . Spouse was not well enough to come with me, but my Hull Sister  stepped in and accompanied me.  We did some great reminiscing about all the concerts we had seen over the years, of how even a City Of Culture could not support a Coffee shop nearby for us to meet at 7pm, and that although the New Theatre, the usual Cultural venue was not refurbished yet, the City Hall did a grand job . We loved the lack of curtains and watching the Scenery changes during the intervals, and remarked that the ancient Lavatory  facilities in the basement had not changed much in 60 years.
I spent the night at the Premier Inn near the Deep, as usual for Hull Trips. Pre Opera I managed to get a table for an excellent Homemade Curry at the Lion and Key in Scale Lane . Sister and I also remarked that we are strangers really to the pubs of the OLD TOWN, we were brought up never to go in a PUB without an accompanying man , Yes really!!

Going back to Filey after a sound sleep in a room with spectacular morning views I planned a walk up river to discover more of the City which moulded me.  The evening before I had already discovered an old house I had never seen before, Crowle House . Here I stop and explain to readers who do not know Kingston Upon Hull. Hull was the most severely bombed City in Britain during WW2, and 95% of its buildings were destroyed or damaged.   I thought I knew all the Old buildings in the Old Town , but found this gem of a facade remaining in an alleyway just off the High Street and thus the River Hull . I left home in 1965 so my explorations then were limited.
I walked along the River looking its muddy best on a beautiful day with Magritte breadstick clouds, past the two bridges that once defined ones day , on time or late, dependant on a bridge remaining open for traffic. 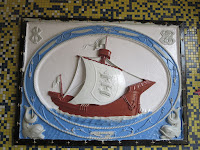 So to Drypool Bridge, and looking for the DryPool which must have given the name, and the metal plaque of 1888 on the bridge which reminded me of my school badge which bore the same ship with the logo of the three crowns of Kingston upon Hull.
I  walked on past the well known and documented Georgian houses of Hull and Dock Offices until I reached one that looked old, and seemed to be occupied in part , but only Google Earth pinpointed its name for me - North Bridge House, Charlotte Street. 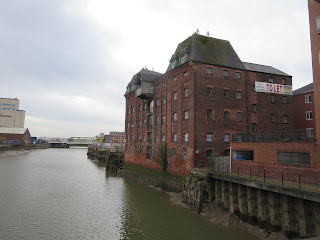 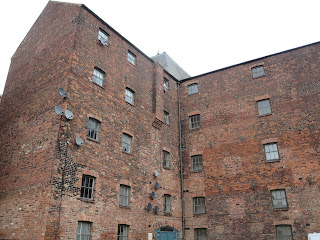 North Bridge House looks as if it was once warehouses, its certainly Victorian and all I can find out at present is that its a listed Grade2 former Ship Supplies Warehouse, a Chandlers. I'm so glad it didn't get pulled down , its very ugly in an endearing way, Ive always had a soft spot for a Mansard roof, and way away from the Humber.

I found Charterhouse, Andrew Marvels home, a redundant graveyard once the overspill(!) for St

Mary's Lowgate and walked up the river to the closed Scott Street Bridge . I'm hoping some of the City of Culture bounty will fall on Scott Street Bridge . A restoration would bring the  Old industrial area of Wincolmlee back into prominence . I started thinking of my grandfather , a ships Engineer with Wilson Line, and remembered his Indenture agreement  as he served time on land learning his trade. He was an engineer all his life,  working with Hull Corporation Transport in charge of Tram engineering   , and in his old Age till his death in 1960 still maintaining his 1930 Alvis , known as Wilfred . I also remember him running the old Singer Sewing machine with a bullet shaped spool running up Cotton  bedding sheets .

Still thinking about Grandpa Bruce I started looking up at the factories still around. Here the Bridge of Sighs across Wincolmlee of  Maizecor, still milling maize into Polenta and maizeflour  for snacks . 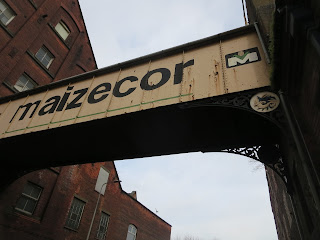 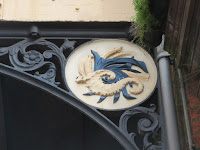 I'm into the Industrial thing now , and turning away from the river back to Paragon . Firstly joy of joy , 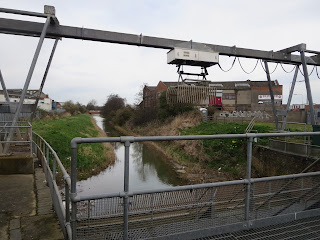 I see the start of Barmy (Barmston) Drain ! Friend at Barmston on the coast took me to Barmston Drain as it enters the North sea, well I presume its come all the way from Hull in a land draining scheme. I saw much more of it when I went with Hull sister to  Dunelm Mill in Clough Road on a new home buying spree. I now wonder if Great Grandfather the Chief Waterworks engineer for Hull In 1870s  to 90s  worked here on plans . He would have loved the nerd in me I'm sure.

Just one more old treat before heading back to the station . I found, just alone amongst Old garages and sheds this wonderful early Victorian house. I presume its listed, as otherwise why is it still there amongst the engineering works ?

Im away from the river now, past Rose Downs and Thompsons and

Next time in Kingston upon Hull I'm going  to Neptune Street and finding Amos and Smith , where my grandfather learned his trade .