In Castle Bolton I discovered a Mary Garden, planted in the last 12 months . I had never heard of one before . I was  intrigued to glimpse into the part that plants played in the life of the Medieval Christian (then Roman Catholic ) Church in England. Mary the mother of Jesus Christ and the legends about  her ,were woven into the culture and social history , warp and weft , of every person in the land whether or not they chose privately to dissent.
Along with the Doctrine of Signatures, whereby the appearance of a plant and its likeness to parts of the body would lead to its use for curing that part ,so too some  plants were associated by their appearance with the life of Mary .
So at Castle Bolton 68 different plants are growing each pertaining to Mary .


I just loved the very thought that Lavender known as Mary's Drying Plant was so called because it got its scent after the baby Jesus's clothes were placed on it before they dried . I wonder that maybe Asafoetida had the reverse affect with His garments before they were washed .

I never knew that LadyBirds were known thus because of the benefits they bring, as in medieval
legend they came miraculously to save crops from Aphids . Their red colour is from Mary's Cloak and the 7 black spots (on the 7 spot Ladybird) represent Mary's 7 sorrows.
Lady's Bedstraw, Gallium verum was thought to have been used as a preparation for the birth of Jesus, and used in His bedding . It was used too in medieval times to stuff mattresses as it contains a natural flea repellent .

Ive enjoyed reading the list of 68 plants at Castle Bolton . I've wondered at how my favourite Small Scabious could end up as Our Lady's Pincushion until I found the picture of one I took at Fountains Abbey. 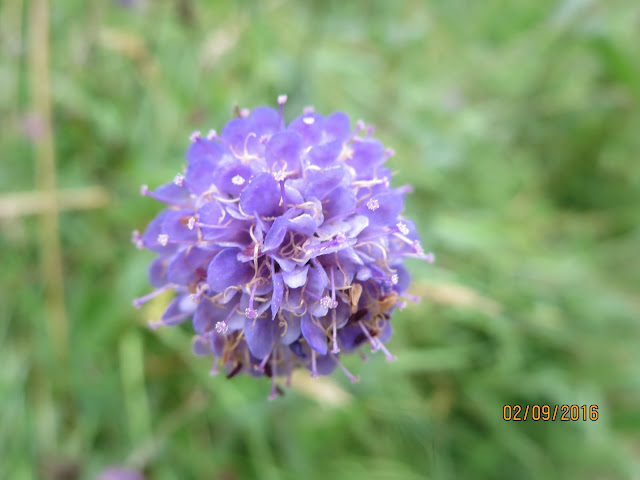 Friend Pam and I like a 'Quiet Day'. Saturday took us to Madonna House at Robin Hoods Bay  for a day of reflection , solitude if needed , and a chance to recharge ones Spiritual Batteries. The  Scarborough Ecumenical Group Crofters who organized the day , use this venue regularly .

And there it was . another Mary Garden .

The Summer Gentian was not on the list of 68 plants for Castle Bolton , perhaps it was included because of the beautiful blue of the plant, a colour associated with Mary but I'm sure she never wore the colour as she was not rich or royal .