Trying not to cf. 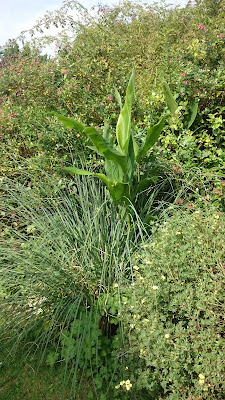 Here in the lea of the South Downs garden of  my youngest daughter is a flourishing Ginger plant, well thats what she says.  I am wondering whether its actually Tumeric as the leaves are quite broad, and the last time I did manage to get ginger growing from a rhizome it grew to about 30cm but had narrower leaves. I've got 5 bits of rhizome of Ginger in the greenhouse at the allotment today, and am hopeful. I have nothing to compare the plant with until the next time I get to the Chelsea Physic garden where both plants thrive in the new beds by the beehives.

This year the weather for growing things requiring high temperatures has been better than in 2015 , and we have had lots of night rain . I am hopeful that the row of Italian plum tomatoes which I have companion planted next to the Asparagus , will bear much fruit, they are doing so much better than all the greenhouse ones around. And I only planted them to ward off Asparagus Flea Beetle, have not watered them , nurtured them or fed them . I am disappointed that I've not managed to grow aubergines successfully either, I did have some fruit last year. The effort of actually growing them , feeding them and nurturing them to produce 3 tiny fruit was not worth it compared with buying 3 for 69p each in the local greengrocer.
And so to Echiums.
I can happily report that the ones in the garden of other daughter are doing so well, and are so high that people are knocking on the door asking what they are. 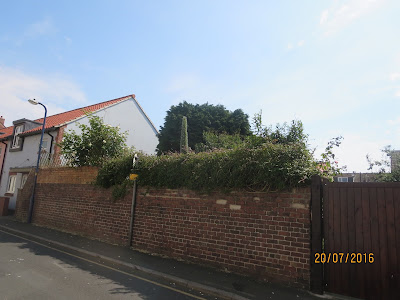 See one peeping over the wall, at moment is at least 15' high. I see that someone in the Echium Plant sale business has started a website where people post their stats and compare their plants. I know that daughters one is tall, and she has four others , a veritable forest. I have considered that we need to keep  my daughter supplied with plants for the next 3 years, when the thousands of seedlings from the ones in the picture have germinated all over her garden . They take three years to flower, and then they die, a triennial rather than a biennial like Foxgloves. I have a tray of seedlings coming on nicely. A few years ago seedlings were coming up all along the path edge seen on this photo, but the first frost got them , as always happens , which is why I have to fleece them , and even then I sometimes am unsuccessful at getting them through the winter. I have a small Facebook Group called "WE got and Echium through the winter" where we encourage one another . Compared with all the other sites on Facebook its not in any way viral , just very Niche , if not Exclusive.