Well I was warned about insomnia !


This has been an exciting week in our household .
It peaked on Wednesday evening with the final of GBBO*. I had never seen much of the programme before, spouse had , as he made me buy an orange top in M and S which he liked on Mary . I wore it twice and gave it away , it was just not me , or Mary as she only wore it once according to my telly critic husband. When I'm out on the allotment he sometimes rests from his book and I come in to find Come Dine With Me is having an unashamed airing in our sitting room . My men seem to like cookery programmes, and I don't take it as a hint as I'm quite good at cooking, just bored with it after 45 years of dinners. Last Sunday daughter and I made our men come out for Sunday lunch to one of the Filey no frills Pubs. It was all on the plate for £6 and just delicious. It made such a change for me too, and the small boys loved it and the Pool Table .
I remember my Aged P saying that she just couldn't think of what to cook , and it had become a chore. I'm not at that stage yet, but I am finding it difficult to cope with all the dietary restrictions suggested by the Filey Surgery for my spouse. The latest one is no purines. I am  a Biology teacher by training and yet had no idea what PURINES were. The Cardiologist told me to google it , and do my best so that GOUT would be limited in its appearances. I'm having a go at reducing our meat intake , not really a hardship : My vegetarian recipes are all so time consuming , however delicious the outcome, and I'm thanking God for Quorn which was just not around when my teenagers were going through a vegetarian Stage.
Weighing up , in my many sleepless nights ,the rows on my allotment which cause me  to rethink what to grow. I have for many years grown rows and rows of Swiss Chard and Rainbow Chard. The freezer is full of it. Of course its the simplest vegetable to grow and always looks attractive , even in the Flower Border. Its just that it needs to be eaten within a day of picking , unless put in a vase of water. and  though I have a list of friends who like to have some , unless they live on my walk home I'm too tired to divert to deliver some.  I will not grow so much chard then . It free seeds easily , and the best plants are often the ones that have .  So next year I will leave one of each of the best plants to seed themselves , red , green and pink and orange.
Sleepless nights have made me plan purine free and tasty vegetarian meals using the 4 aubergines which are my total crop for 2015 , and devise tasty soups where all the endless Runner beans are pureed and ordered to reinvent themselves with mint and peas. Spouse says he's had enough Green soup , even with mustard added.
Sleepless nights too have cut down the blackberry , weeded between the raspberries and rhubarb , ordered more manure and sharpened and cleaned the shears. Sleepless nights with the addition of anxiety have made sure all the Horsetails are pulled out without dropping a single bit ,and put  the incinerator bin . Allotment partner has nearly eradicated his ,with his patent method involving wire wool and weed killer-dont ask !
Sleepless nights , I was once warned , may lead to taking actions that are regretted in the light of day . Its such a shame that I know my Amazon password even in the small hours, and even more of a shame that Amazon knows my Visa Card number even in the middle of the night .Its a shame that my phone , neatly backlit does not disturb sleeping bedfellow as I do half an hour of Facebook and see that friend has planted a row of Crocus sativus on her allotment so that she may harvest some Saffron . 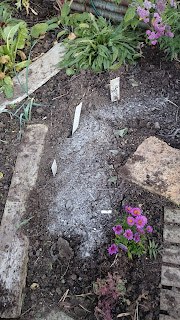 The parcel arrived yesterday ;25 neat autumn flowering Saffron Crocuses which in the middle of the night I bought and paid for . I planted them today hoping they will autumn flower , and that I will be able to give my friends some saffron on the way home. Ive got lots of Saffron in the Spice cupboard. I buy it every time I go to the Chinese Supermarket in Scarborough. My children bring it back from Spain for me. I always forget to use it now that I use the ready cooked 2minute Microwave rice.
Next time I  am sleepless I will look out for a recipe for Saffron buns , or maybe  I wont .