The Xylem of Nations

I have been travelling this amazing water system for 4 days now. The scenery on each bank of the Rhine is fascinating and in some places spectacular, and in some places it could just as well be the Thames or the Humber without the junk of course. No polythene bags here hanging from water level branches, no plethora of graffitied signage. For here on the German stretch of the river there are just enough signs for all the Mariners and voyagers to make sense of environment and its logistic possibilities. I wish I had known on Day 1 that the large numerals displayed were actually a Km apart, (should have worked that one out ) and tell of the distance from the source of the Rhine in Switzerland .
This one  555 is more interesting to me than the actual landmark it referenced for me( We had been told that after 555 was the Lorelei, the biggest damp squid of the journey ). I liked this sign with the triangles and am glad it was explained. It shows that on the narrow bend approaching that no other craft are near. 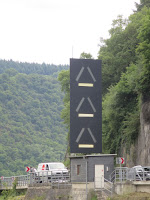 So here I am aboard a river cruise with spouse who has gout and so can't go anywhere further that 50 m except in a wheelchair. He is so much better that he was 2 days ago. What an unexpected blessing really as he awaits major heart surgery and we are only on the trip by the Grace of God and the Ok from the cardiologist . The gout has made him rest, so thats how I am looking at it . There is so much to enjoy from sitting and looking , and as most of the other passengers are on the excursions we have the pick of seats in  all the public areas and unlimited food and  drinks and the kindness of strangers. 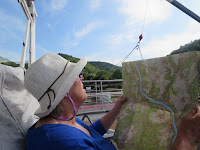 The river traffic is simply astounding . Just watching the barges full of grit , coal , sand and , wood and metal coils makes me realise how this is such an efficient way of transport . Bring back the better use of canals in the UK says I .
I look like my well travelled aunt and Godmother Alice Susan Bruce (1905-1986) in this photo, But it is my Aged Parent in Beverley who is the map person like me, and my late father Harold Gower Bruce(1910-1975) who would have liked the symbols on the maps,especially that all the Km number marks are on the Michelin Rhine ones. He would have loved the whole transport system . He would have been looking at the signage on all the river craft and working out where they were registered, where they were going and what they were carrying . My Master mariner forebears were Ocean goers, but I'm finding the river just fine Thank-You. (Bonus is that spouse is not queasy as he was on North Sea Ferries .This is gentle , with just the occasional back wash from fast boats. )So much is he enjoying himself that when he awoke this morning he said , Look we've got to 434!