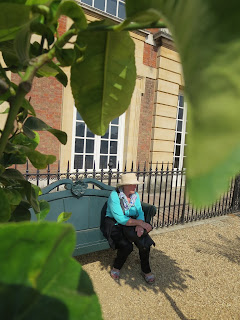 TODAY was to have been our free day in JERUSALEM .I had planned that we would go to the Burnt House. So Colin and I went to a house which had had a large fire instead;OR RATHER to its gardens.In the still sweltering heat of the metropolis we took the cool travel option,  the river Thames.(Richmond to Hampton Court)

I have been around the surrounds of Hampton Court Palace dozens of times. I have escorted elderly aunts, pushed prams,treated foreign visitors and in desperation tried to interest teenagers.I have been in springtime to see the daffs, walked dogs along the path from Kingston Bridge and prepared endless sessions for teaching the Tudors. I dont like the Tudors but its Colins favourite historical period, and he reads every book going, from Terry Deary to Hilary Mantel. Today he also wanted to see the restored William and Mary gardens.
All I can show you are some hot photos, of red flowers , desert flowers, and acres of boring formal gardens which had to be viewed but not enjoyed as the aesthetics of them would have been ruined if a seat had been placed near enough to view the vistas. The one seat I did find was so hot I could hardly stay there. The fountain looked cool but wasnt , and there was no way from straying from the gravel paths on to cooler grass borders. Not complaining really,I am glad that all the Italian and Spanish tourists felt at home.

I have been praying every day for David Cloake the vicar of St Phillip and St James Whitton, so said a special one today as we sailed past Strawberry Hill and into Teddington  Lock.