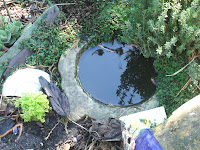 There is a dead squashed frog outside our gate in the road. I think it must be one of ours. Even after we had to remove the pond  as small children became regular visitors here, we have still kept  water in a small sunken container. We always have tadpoles even in the smallest container. As I garden  and dig, cut and prune and  I know at least 3 of the frogs by markings. There might be more frogs, much smaller ,lurking in out of the way places.
I was actually surprised at how sad I was to see the dead frog, as I'm sure Its one of ours. There are you see no ponds left in the middle of old town Filey. When Mitford Court was built in 2004  the last pond within 100 yards of our house was destroyed  to make way for the new build . Everyone around us has a small back yard. We and Rose Cottage(no Pond)  have the only gardens around. I am hoping that some of the gardens in Queen street  around the corner have got ponds.
We need you see to have an exchange of genes in the Frog population. I wonder how far frogs actually will go to spawn? The Country Park a mile away has hundred of frogs in the pond near the marker to the Wolds Way. The Filey Dams will have thousands.I just need a few here. They eat the slugs and bugs and are a gardeners friend.
I am sure the dead frog is ours. I have watched enough CSI to know . It was prone and past, facing from our gate out . I know it was on the lookout for  mates. We have spent enough time talking to small children and answering the question what are those frogs doing to know that the ritual goes on for  often days.  Yes it was on it way out , and hadn't done anything in our garden or we would have seen. 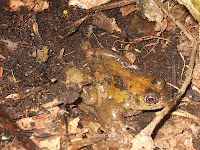 I have just looked in all the regular frog spots, behind slates, under drain covers, in amongst the leaf mould. The container of water by the greenhouse contained a dead frog, killed by the freezing temperatures a week ago. Not a sign , and then remembered the COMPOST HEAP .


More Frogs of Filey -Please come to my garden but look before you cross.