Not the Children of men

Spouse has just suggested we watch The Children of Men  at 9pm. I have  soundly refused. Its a great film, Ive seen it before.  Its an even better book by PD James, infact one of her very best. I've always loved Science Fiction , and this dystopian story , where the youngest person in the world is 18 years old, and the elderly are taken off in trips round the harbour to death  has a completely believable story line. I even think that all the milk we drink these days must be so  full of hormones that I cannot see why Organic milk isn't more popular. No Children are born in the world of this story, and I worry now that barrenness is a part of our  true world today.  Are we slowly poisoning our Human Race to infertility today in the west?

I would have watched the film again, but I am really not in the mood for the darkness , gloom and misery before the happy ending. The music is great, lots of Taverner and Mahler and Handel  but I' ve had enough of cult  films for a while. I am ready for a re -run of 'The African Queen' or Sleepless in Seattle,or maybe even 'Pretty Woman'.

We have seen 2 films this weekend you see. The first one was  Soylent Green. Why had I never heard about this film before? Where have I been hiding my curiosity and film search mind.  After all I managed to persuade spouse to buy other unlikely DVD's . Soylent Green managed to pass me by in the 70s. I had not even heard of it until someone in our homegroup lent it to us with Topsy Turvy, the story of G and S.(when our daughter was doing Broadway Pirates. This film sure puts the Day of the Triffids in the shade, and believe me you will never eat Lasagne Verdi ever again. Second film of the weekend was Gran Torino, another tale of misery , woe and darkness  but hope and light overcome. 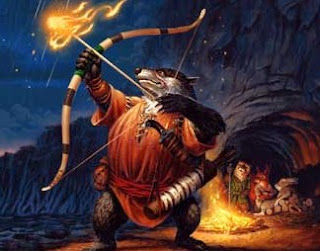 There is only so much wretchedness I can watch at one go. So I will go back to my Redwall book, a tale of murder and villainy , where mice and hedgehogs and badgers are the good guys, and weasels, stoats and rats are the vermin evil do-ers. So thats all right then.
Posted by Margaret Mary Rowling at Monday, September 27, 2010