Common Spotted Orchid or The road to Little Egypt 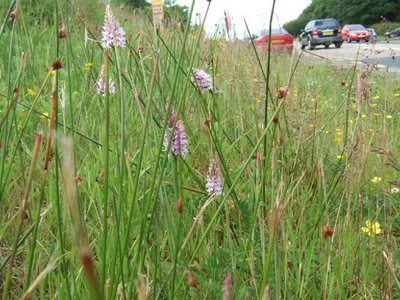 Three years to the day since I mentioned in this hallowed blog the appearance of my 1st sighting of the Spotted Orchid for the year. Like surfers I have a secret spot. Not secret any more of course, I divulged the location in 2006, but maybe hidden or even so obvious its a not a spotted Orchid Secret spot but sensible overt lair near a layby of a habitat.
I travelled the same Kings highway daily for fifteen years and know every bump, raised ironwork, fencepost and tree.
I have seen the mighty Bypass built efficiently and on schedule by the workmen of England. I have felt the oozing relief of Reighton Hill as it becomes a viewpoint again. It waits patiently for the 121 bus from Hull to breeze happily through and give a sense of 'being just in the real world 'to the ribbon of cottages and tiny churches, one now a posh cottage complete with garage and tubs.
I have driven patiently behind tractors at dawn and haywains at dusk. I have been bitten by a horsefly arrogantly flying through the car window looking for a horse. I have seen barn owls flying just as the sun sets, just above the bonnet of the car. I have endured the early morning winter sun daring to shine straight into my eyes as I cross the boundary from North Yorkshire to my beloved East Riding, and dazzling my senses and boding danger.
I have seen vistas of sheer Cooks Tour loveliness- Bridlington bay from East Huntow top, a medieval view the same for hundreds of years, the Priory and two trees, one on each side of the road. Ebor flats of course may be overlooked.
In the other direction, the homeward bound , more joyful journey albeit North the view of Filey Bay from Reighton, once spoiled by Little Beirut, now a temple to the holidaying aspirations of the New Butlins folk, The Sands or some such eponymously clever and original name. Time Team 3009 will be perplexed I'm sure, with the post holes showing rows and rows of small dwellings overbuilt with larger ones, and the remains of the huge monastic fishpond lined with tiles.
I have seen the direction of the breeze , the airstrip and the windsock over Gr 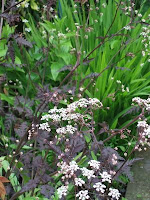 indale way , the gradual transformation of the cafe and garage of Speeton Field, the dead windmill in the Newsham distance and all the ancient hedgerows.
It goes like this in my mind, Snow drops and Primroses at Southfield farm, a flush of green on the hawthorn heralds spring, then the Blackthorn blossom for miles and miles, white and promising sloes. Then the flush becomes a reality, and out comes the May, white, pink, red even and the verges start to grow , I wait for the Queen Annes Lace.
I remember that I ha 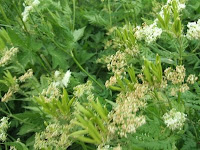 ve its sport Ravens Wing in the garden at home, and wonder who first thought to collect its seeds and breed it on , selecting and choosing , selecting and choosing , until Chilterns Seeds helped you to forget it had ever been Queen Annes Lace by the side of a road. I am coming slowly to Orchids because I have not finished savouring the Red Campions and the Sweet Cecily, and the Hogweed- I'm ready now
COMMON SPOTTED ORCHID
DACTYLORHIZA FUCHSII 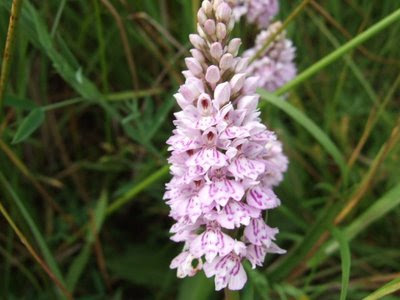