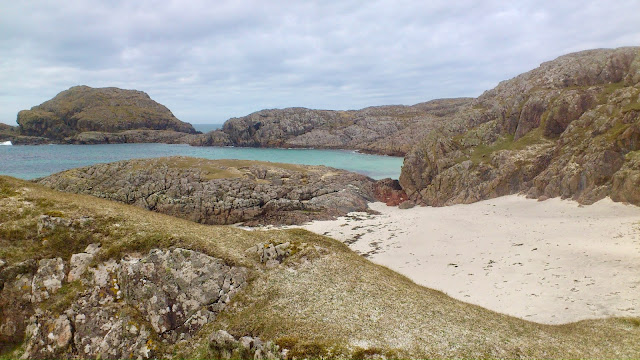 I've just been to Iona . Its not  the Isle of North Harris but will do for now.
My screensaver reminds and enthrals. The one on my main PC does a slideshow of all my picture files , and I particularly like the way it gets many windows out of one picture by zooming in to bits of one . So one seemingly ordinary picture of a field, when seen another way,  is a fascinating collection of random items; bent grass stems, patch of Butterbur, spoor and droppings of Canada geese, rainbow, stream , stile and clump of earth . I then remember that the picture was taken just after dawn when I was trying to see a Corncrake  , could hear one  , but not see one .This time .
So I've revisited Iona where I've been 5 times for week visits. One has to go  for more than 2 days to ensure at least sunshine on one of them . I've been back to my favourite "Bay at the back of the ocean ", Ive imagined the sound of the spouting cave , and the smell of rotting seaweed , and the inconvenience of the accompanying flies.
These last two months I've been in the Hebrides nearly every day as neighbour has lent me the Lewis trilogy by Peter May . I'm on the third one now ,The Chessmen . Unlike many trilogies , and I should know, as spouse has just read the Hilary Mantel one , which got heavier and heavier , literally and metaphorically , the Lewis ones tick all my boxes. They are Murder mysteries, can stand alone, but better read in order, are well written , are about the sort of landscapes I love , are in the DNA, speaking as one whose forbears came from Skye, whose detective is flawed but  interesting, and best of all for me, a cartophile,  can be enjoyed best with a map.
So I'm in the Isle of Lewis in my head. I know more than is recounted in the books , as I have explored all the other interesting places on the island , the brochs . the archealogical sites, the cafes and distilleries , the peat bogs and the flora. I've had a holiday all of my own choosing from my home .
I've had many vicarious holidays this year. I've been round Australia with Arthur Upfield, a holiday I do every 2 years , binge reading each novel with my new map .The last 2 Australia maps dropped to bits from over indulgence. I've been again to Monterey with Steinbeck and Sweet Thursday and all over the rest of California with same map with Sue Grafton's  Kinsey Millhome (read 6 books so far). I gave Peter Robinson another go as the March cosy reading season began, got through about 5 of those, yes I quite liked them , but totally unsatisfying as none of the places are true to a map. They are hybrid . I shall only read when there is a famine of who dun its.

I've also been on holiday with Susan Calman on Channel 5. I could watch her all day . She is so clever and funny . Yesterday she too went to Lewis and Harris , so now I've been to see Harris Tweed made , and saved money by not buying any as I would have done on realtime holiday,  and then put the material in my sewing box for 40 years like the piece I found with the trade mark ,still waiting to be made into a skirt .

Just incase you are wondering about my fantasy holidays , Yes! I've been all round Middle Earth too  with Journeys Of Frodo , The Atlas of Lord of the Rings , and I would  quite like Rivendell for a quiet few days . 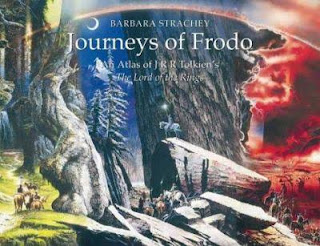 Labels: Arthur Upfield, Bay at the back of the Ocean, Harris, Iona, John Steinbeck . Journeys of Frodo, lewis, Peter May