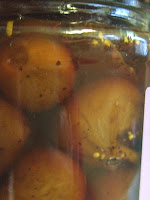 Who could be without a jar of these delicacies?
We have been pondering the jar. We have been enjoying the implications, intended or otherwise of the dynamite in the jar.
Longtime Readers of Bridteacher will know that we do not give presents at Christmas , except to the school age children in the family. We do not give cards either except to friends far away.
So  we have had so much enjoyment and hilarity opening the the unchristmas present from Rachel and Robert. A thank-you for the use of our beach hut .
We have enjoyed the unchristmas present so much I am sharing it with all my friends. Firstly R and R had no idea that Figs are a long standing joke  in our family. If we see them , green in the greengrocers, we always buy one for  Colin.  More than that, when he was told to eat  for health after his Heart Attack, and then Diabetes diagnosis, he cut out cakes and biscuits, puddings etc and stuck to Sister  Rose's diet sheet very carefully.  Apart from the fruit that is. He took it into his head to eat lots and lots of fruit. The sideboard would groan with it, fresh and dried. Our children would indulge him with medjool dates from Waitrose, and packs of figs. So much so that Sister Rose had to explain that there was too much sugar in his now healthy diet . So the figs are going to be a real feast for him. More than that , the size of them belies indulgence, unless he eats them all in a sitting.
R and R did not stop there in their inspired generosity. Every base has been covered .
The unchristmas present was accompanied by a Christmas Card of MY FAVOURITE SORT a Burne Jones pre-raphaelite Angel, and all this in a week when I don't know whether I'm coming or going. Who says God has not got a sense of humour. 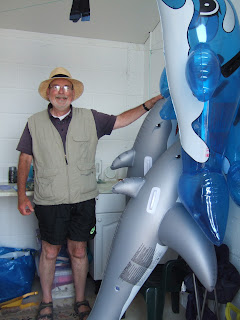 See you all at the Beach Hut  !
Posted by Margaret Mary Rowling at Wednesday, December 15, 2010