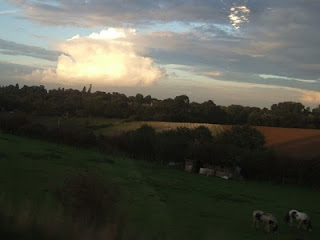 It doesn't really matter if I've got the name wrong. I have looked in my Cloud Collectors handbook and decided that whatever its name might be , Cumulonimbus or not ,this cloud was part of my life for 5 minutes as the train from York to Kings Cross gave me chance. I marvelled at its natural Beauty.
I don't really care how the planet came into being, or how the Earth fits into the scheme of things. There might not even be a scheme of things. There might be a chaos of things. I know what I believe, and that it is that the  infinity of time and  space is too big for me to even think about . I now think I know that we are not living on a flatworld held up by four elephants, that we will not be offered the choice of a red or blue pill to the Matrix, that the world was not created in 6 days of the 24 hours we have now, but I might be wrong. I could think about these things for years, but no amount of equations, discussions and Hadron converters will ever convince me that these are going to add value to my life .
My teflon frying pan was a useful by -product of Space exploration, but I have gone back to a Wok. Richard Dawkins is providing people with something to talk about.
Even if we are forced to become an underground Church I believe that nothing is more powerful that an Omniopotent, Almighty and Omnipresent YHWH For the first time in my life those long words of Thomas a Kempis (1380-1471) resonate.
Laud and honor to the Father,
laud and honor to the Son,
laud and honor to the Spirit,
ever Three and ever One,
consubstantial, co-eternal,
while unending ages run.

I cannot make any argument for or against my beliefs. I am not clever enough to weigh things up ,and present lucid and logical statements backed up by facts, or  theories of facts. My only certainties are supernatural answers, occurrences and interventions in my life ,not explained by rational. I know what I believe. 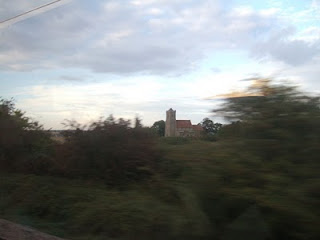 This church of St Andrews, Woodwalton  which is only an Adlesdrop glance from the same train as the King  of Clouds puts my whole belief into perspective. This friendless Church whose website invites one to become a friend of a Friendless Church, seems to typify the waste of time in keeping and maintaining an idea that a church is bricks and mortar, when to me a church is a place to keep out the rain as one gives Glory to God. Yes , it is a charming landmark, nearly at Peterborough. That is all it is. It might as well be a Travelodge or a Train Spotting  centre. 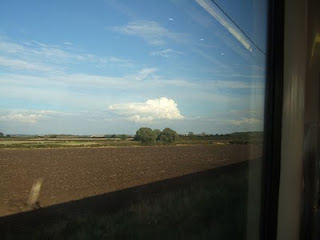 So here is the King of Clouds before I passed it by. It Beckoned. I Responded.
Posted by Margaret Mary Rowling at Tuesday, September 21, 2010