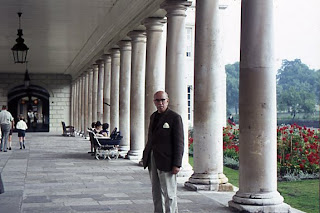 This picture of my father was taken in August 1970.
He spent a few days with me in London, staying at my flat. He didn't know London well, and I had the privilege of showing him around.
We took the River boat to Greenwich and walked around The Royal Naval College, seeing all the Marine pictures he so loved. The view from where he stands in this picture , high above the River Thames and not far from the Royal Observatory and the Greenwich Meridian  is spectacular for London , matched only by the view of the River from the Star and Garter at Richmond or the downstream view from Westminster bridge. You see, my father loved views and Ships. Every morning ,from his bedroom window, in our Sutton on Hull home, on a hill called Riseholme,  he would get out the Telescope and look across with it to the docks. He would call to us what he could see, spotting the marks and icons on funnels as we spot logos on trainers. The Hull Daily Mail would confirm or inform his viewing. He always turned first to the the Sailings and What's in Dock page of the paper first.
Our childhood Saturdays or Sundays would often include a drive to Paull  or King Georges Dock to watch the ships in and out .In 1953 we all waited by the riverside in Paull  to  wave to Great Aunty Julia ,  sailing  into Hull from New York.  The ship was the Wilson Lines  Rialto.(5000tons). Aunty Julia came for a visit , but stayed for 7 years until her death.
We were all disappointed when a barrier was erected at Paull, as it meant one could no longer sit in the car and watch the river traffic, as the view was gone. Ship watching involves often hours of expectant waiting.  My father knew all the vessels, from the Humber Pilot  launches to his favourite (Ellerman)  Wilson liners, plying trade across to Scandinavia, Rollo, Volo, Bravo, Borodino, etc . My grandfather had sailed as engineer with Wilson Lines in its golden days. I have all his Ships Papers still.

We followed all the development of King Georges Dock. Father would explain all the changes to us, we learned about Lockpits and the Plimsoll line, welcomed the new Roll-on Roll-off ferries , and marvelled at the danger of the dockside, the machinery and smells of churned up oil slicks, and the water  which Father always called muddy umber. These dockside visits would not be allowed now, in the interests of Health and Safety, but they were jewels in a childhood, remembered , taken out , looked at and put quietly back. 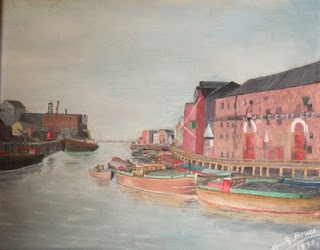 Here is one of my fathers own paintings, he did it especially for me, and it is my treasure -the view from Drypool Bridge in 1970.