I was asked to do a very simple thing a few weeks ago. Please would you update one of the notices on the notice  board.  Please would you remove the photos of those who have died or moved and put  some recent photos of all those who still help out at St O's Parish Church. No worries , the work of a moment.  Take some digitals , trim them , bung them quickly on the same notice where you have just removed the visages of the dead , dead and gone, or just gone.
I use those last words quite deliberately. We have lived here 20 yrs and still people in the parish  think the vicar who left in 1991 was not only irreplaceable , but a saint. (He was a saint of course , but arent we all we living crowd of witnesses).In this Parish I wonder when people will stop talking about what a wonderful vicar he was. Very I follow Apollos, I follow Paul, and how right to point this out in the NT . When we moved to the Parish no one talked about their faith or what Jesus had done for them but just what the last vicar had done.
So I take down the notice. It is cleverly backed with velcro type fixers.

First hurdle -The notice  board is a bit of a mish mash. Drawing Pins , sometimes 2 to a notice, sometimes 4, sometimes yellow , red or blue , sometimes brass remind me that I am not in charge. I only have to fulfil my own brief. I have to change 1 notice in content only. I do not have an Ofsted team measuring my borders with a ruler, I do not have a design team looking for state of the Art Saatchi visuals.


Second Hurdle-Photo-chromatic glasses are not a help. Great Pic of Rev F, in gardening clothes. Great pic of Rev H in full gear with highly patterned stole. Canon Rs hair is a mess

So I ask them if they want a formal or an informal, crop to faces, lighten faces,edit hair. Take photos indoors away from bright sunlight.


Third Hurdle-Warden suggest the one I do of vicar is bigger than the others.

No problem . Have forgotten that vicar pic  should be replaced  , she is on holiday for 2 weeks.Will trawl the archives. Found lovely one where she'd just had her hair done, but  taken at garden centre, so no dress-ups.Will e mail vicar and tell her to let me know when she is back and tell me if she wants me to take another some time when she is in uniform and has just had hair done.

Fourth Hurdle-the notice does not need replacing, its cardboard and shape are to be retained. The  success will be in the arrangement.

33They came to Capernaum. When he was in the house, he asked them, "What were you arguing about on the road?" 34But they kept quiet because on the way they had argued about who was the greatest.
35Sitting down, Jesus called the Twelve and said, "If anyone wants to be first, he must be the very last, and the servant of all."
and  My sons

21"What is it you want?" he asked.
She said, "Grant that one of these two sons of mine may sit at your right and the other at your left in your kingdom."
So nothing changes . People will still maybe be interested in order and arrangement. I will use my logic. I will put the most senior retired cleric at Vicars right hand. He will have the largest pension I think. I will put much loved Associate minister at her left hand. I will put other retired clergy persons  in alphabetical order.

Fifth Hurdle-Why are the Lay readers not on the notice board?

Do them. Put them at the bottom of the notice board. They are just as  good but not of the order of Melchizedek. No one can argue with that , or can they. priesthood of all believers rings a bell in my brain but I am not listening in the interest of sanity. 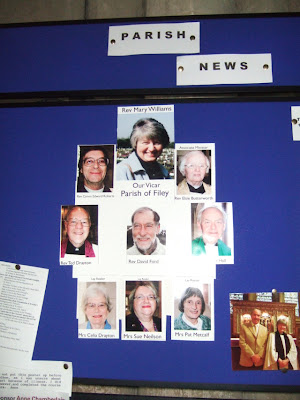