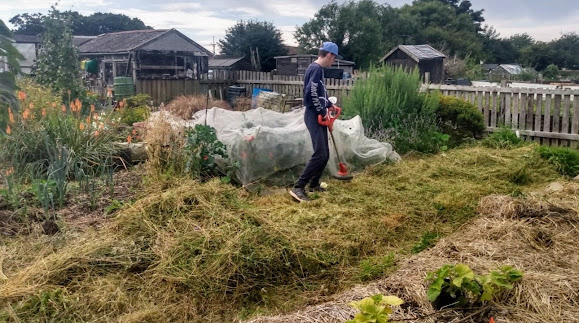 Since my last post in May I have not been enjoying a deckchair in the garden , reading countless books of Detective fiction, baking Frangipane tarts , walking along the shoreline in bare feet or decorating the downstairs bathroom. I've had dozens of ideas of blogs to enthral . My spare time has of course led me to my Allotment plot a mile from my home here, where I can see the sea when I stand on the front step.

For 5 years now I have had Dave's pristine (once) old plot as well as mine. I used to share my plot with Bernard, and I have his as well since he married Queenie in 2017. I am what John Siddle used to say was one who gardened in organized chaos.

I cherish those words. John taught me English at my Grammar school ,Greatfield High school. Hull , in the 1960s. He came back into my life when he retired to Filey . On this day when grandchildren get English results, I don't sit here hoping I would manage my O level English Language again now; I don't need to imagine my old mentor is checking my participles , or my Latin master appreciating my understanding of the archaic language as informing my Botanical nomenclature, as I couldn't care less. Wen i text i say u and c and as long as it is understood it no longer worries me. I can't text quickly like my offspring and their offspring. I can't Word Process quickly either, I use 2 fingers. If I were back at my school I would not have taken Chemistry and PE, I would have sat in the Commercial class as it was called ,and learn to touch type to music as I used to hear them all doing, that is a skill indeed.

My organized CHAOS may be discerned by the no dig gardeners, the new  Ruth Stouts, and and present  Bob Flowerdews as an Allotment of the future times, even here in the land that time forgot, where Peat Free Compost is not sold in our allotment shop (yet ). Even here we No Dig gardeners need discernment, as the Peat Free Compost in our wonderful Reighton Nurseries is not all it seems either, as the ingredient replacing the peat is from China!

I want to record in 2021 that even if I have to give up my plot I am trying to use Practice which though not completely in the school of Charles Dowding  is as good for the planet as I can manage . Here I put my hand up to Rat Bait in sheds,  occasional weed killer on the border with the Railway embankment, and use of Cardboard that is not always brown .

Paul Wilson , (Advanced trees and grounds) supplies me with woodchip for my paths, the grandsons are employed to barrow it up to the plot.

Firstly Im thankful for the supply of good , large pieces of cardboard brought to my plot by friends. Many days I arrive at the plot to find treasure outside the shed door as I arrive to the packaging from garden chairs, beds, flat packs and even coffee pods. Thank you all the Helens, Stuarts, Lisas  , Michaels for thinking of me,

Networking always pays off when in need of supplies for No Dig.  John and his wife in Irton used to sell me all their horse manure. They were the first of the interesting folk one meets only through cultivating the earth . 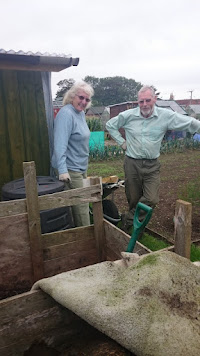 John would ring me and say he'd got a load , did I want it ? He had one old horse. The manure was straight from the field into sacks, and pure gold . It took a year to rot down and though I used to find it hard work barrowing even the sacks from the road to my plot , the two of us working together , it took half an hour , and worth it. I was upset when his old horse died and that supply ceased. Now my friend Ingrid whose daughter has a horse will bring me supplies , and if the bush telegraph works well on the site I get to hear when a free load has been dumped at the end of the road by my plot.

That is how I met Therese and Stuart one February as we  spent a bitterly cold  morning helping ourselves to the contents of a winter  cow byre  . They are not only great suppliers of spare veg and cardboard but helpful and friendly, perfect allotmenteers. It was on that day that I met the young Syrian eye -surgeon refugee, who was waiting for his status to practice in this Country, From him I learned about the pale courgettes beloved of Syrians in their cuisine, which I now grow and pray for Syria as I tend them . 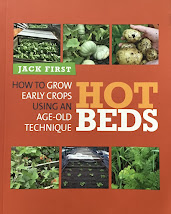 I tried to encourage my beloved to sit in my shed /greenhouse in the winter, cosy and warm next to my hotbeds , which I can get to 80F in January , February and March using straw , manure and urine and reading my book on Hotbeds , he won't, even though I have a sun lounger for him.

The straw for my hot beds now comes from  friend Colin up above Hunmanby . He delivers straight to plot for me. I leave all the spare bales outdoor until October to get soaking wet and then it goes beautifully on top of the cardboard, with handfuls of chicken pellet fertiliser, and any donated horse manure. Colin also brings me horse manure from his field, let out to horses. This is fantastic stuff as it is already 3years rotted and  growing magic. 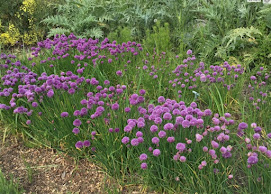 John Siddle might see some chaos on the plot , but it is very organised too. I let Borage and plantains seed all over as pollinators . The Borage can grow to 3feet tall in few weeks . I don't remove it, it will seed freely for next year, and is so easy to spot may always be pulled up if necessary. Chives are the first mass bed to attract the bees, after the Woad of April, the Cowslips, Primroses  and Violas of March and the Hyacinths and Daffodils of January and February. All summer long a favourite native plant Scarlet Pimpernel creeps and flowers, I rarely weed it out as I do all the Chickweed which goes to Pete for his budgies. I like the Groundsel and Sow thistles, and remove the Flowerdew way by just pulling and leaving to rot down on the soil's surface as mulch, as with the spurges and speedwells. I can always recognize them if I have to remove . The Couch Grass and Horsetails are another thing altogether, removed and incinerated as soon as spotted. This is easy with the Horsetails , as Bernard eradicated most of them , but the Couch Grass is so hard to get out , as every little bit of underground stem if left in the ground will thrive to produce new plants, and as for Bindweed , that gorgeous 'Grandma Grandma Pop out of bed ' plant that has to be removed if possible and its underground stems look like a tube map.. 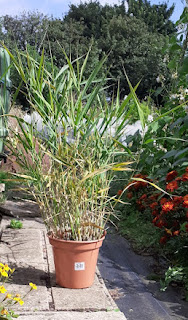 This year has been very hard for me to keep up with removing the pernicious 'weeds ', as I do not have time . They need an army of people who do not carry I am a carer card.

Tagetes minutii  did not germinate well this year. It is the companion plant that exudes a toxin which slows the growth of Couch grass,  so next years first challenge . It is a wonderful plant , growing up to 5'tall and I like to make windbreaks of it. I'm growing Tansy too amongst the raspberries , same use of companion planting.

I have been nurturing a pot of Ginger  or Tumeric all year, but now realise it is Couch grass. Its beautiful though and could do well if was marketed as a conservatory plant and watered well. It would be cheap and easily divided to give away to friends as long as not planted out, then you would be as popular as if you had given them Japanese Knotweed. Would my friend who thought I went to Roedean please ignore this advice. I never should have said to her a we drove past the school on way to Newhaven , 'there my old school' because she believed me for years I later found out . If you are from Hull you will know that Greatfield High school in 1959 to 65 was rough, and girls like me had to get tough to cope with it.

So Ive surrendered my Thunderbolt adapter now that Ive given away my Mac air, but bought a Lightening adapter for my ipad . I shall be showing my beloved his grandson  Reubens Blog, this blog and all my photos as soon as I have him as a captive audience in front  of the TV set, just as I've trained him on the input from the remote.