I'm listening to the Dream of Gerontius. It is the perfect mix of melancholy and hope . I'm feeling maudlin with due reason , as my Aged Parent died a good death last night. For the 9 years of this Blog I've often written about my trips to Beverley to visit her , take her to Communion, to Tesco's , to the Hospital , to the bank , and then just to see her.
This perfect little town, a hours drive across the Wolds from here, has been a welcome and interesting stimulus for putting thoughts to e-paper. I drive  from Filey,through Hunmanby ,Burton Fleming, Kilham, Driffield and Leconfield. I was going to say I know every hedge and pond, but it would be better to say I know every place where the speed cameras catch One. I know that most of the way I have to drive quite slowly as the potholes at the edges of these country roads are lethal, I've already had to have the Volvos suspension( if thats the word) seen to. It could be that I went over the bumps on the allotment road too quickly, but I blame the stretch of road between Kilham and Rudston. On my return journeys from mother when I drove past the site of the Roman Villa on the Kilham to Rudston Road, always stopped and admired the view.  From Driff to Beverley it is the Leconfield road that catches the most speed merchants. I did get some points on my licence once  for going 37 miles an hour. I thought that a bit mean , but it did make me cautious from then on . The 50 mile an hour speed limit from Hutton to Beswick seems so slow. Often I opt to go by train to Beverley. If I went  to Hull to visit my sister and Primark  I always disembarked on the return journey and visited Mother  , had a coffee in CaffeNero , a walk round M and S and then back on the train . Beverley had everything for a daughter visiting a Mother in a Care Home, and was responsible for 2 years of good visits . The ambiance and History of the town always delighted me . (Note to self -keep going back , get to know the town in a new context!)

Whilst Beverley town  has been my balm in difficult days, my allotment remains as my constant and necessary balm for everydays and alldays.

Many times I go from home to water the greenhouse in hot weather, to pick berries in the mellow months, to weed in the verdant ,weed frenzied months and to generally just look around and sit alone all the months . Its my place of SPACE, my retreat , and the place where I tell the time by the passing of the trains from Beverley every 2 hours, realise Ive been gone 2 hours and hurry home hoping Herons is still open .They are used to me with a basket trailing soil and full of assorted flowers and veg which I have to move on to  the counter whilst I find my purse.
My neighbour has been growing Everlasting Flowers,  now called Xerochrysum bracteatum  since they were got at by the taxonomic botanists in 1990 . I still call them Helichrysums , but then I still call the Mint Family, Labiatae instead of Lamiacea. I know what I mean.

I sit on my white plastic chair outside the greenhouse  and look out across my plot , Dave's Plot, Bernard's plot and Eddie's plot . I know it looks colourful at the moment as my sister went passed on the train and then told me so. My Clary and David's Everlasting flowers, Bernard's Michaelmas Daisies (just in bud), all our Sunflowers, and most importantly our free seeded Nasturtiums which David and I like, and Brian two plots away hates with a Vengeance.
Its been a good year for the Everlasting Flowers. I remember when Flower Arrangers like me would spend hours wiring them all, for the Dried Flower Arrangements I so loved in the 80s, but now  hate  . I hate them even more since visiting Aged Parent in Care Home . Everywhere one went they would be lurking , the shelf in the Visitors Cloakroom, the side tables in the sitting rooms , and in Mother's room when she first arrived . I caused that particular vase to have an accident .
Now I LOVE the way my allotment neighbour has dealt with them . Having grown them so that without blemish the large flower heads , just open enough to show their symmetry and beauty they are then picked and the heads thoroughly dried .They can make the summer last till the next time summer comes . And last they will in the way that Casa David and Jen are using them . They put them in a Goldfish bowl. 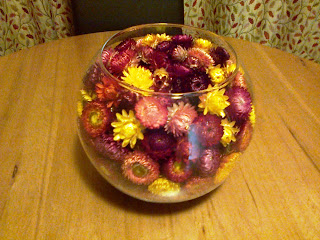 I am growing Kale for the first time ever. My Aged Parent grew it in row after row in Sutton on Hull in our large garden . I used to dread her saying just go and cut some Kale for dinner please Margaret Mary. I did not appreciate the way it was cooked. It would be boiled to death in lots of cold water brought up to the boil , and then a plate would be pressed on it to get the water out. Spouse remembers his mother cooking and straining the water off cabbage in just the same way . Thankfully nowadays we realise that the young Kale leaves  may be quickly stir fried, and it is a cut and come again veg for summer through to next summer  , everlasting till everlasting . M and S it must be said do the most delicious Kale crisps which are deep fried in Cashew Butter, but at £2 a small 30 gm bag they are not going to have my money very often .
As David remembers the sunshine all through the winter , I am going to remember my beloved Mother everytime I pick some Curly Kale .