Daydreamer  once told me not to blog during insomnia, but its nearly true morning. The first car doors have slammed outside as neighbours go to work, and wheelie bins have been clattered out to the street for the last hour as the recyclers of Filey forward plan the next week.

Ive not given up this work of love formerly called Bridteacher, but have been doing Fileydaughter for the last 8 weeks or so .
Daily trips to the Hull Royal Infirmary to see aged parent, and now to Castle Hill hospital Beverley to see most aged and failing parent have actually had much joy in them.
Three weeks ago eldest daughter and I took my mother to see her Plastic Surgeon  . He duly signed her off and we celebrated with  a trip to the nearby Waitrose at Willerby. She loved it and the bowl of chips in the cafe. Her poignant remark as she trolleyed past the vegetable aisle with its pristine boxes of green things she had never seen before was
"well I dont need this aisle, I'm not doing any cooking now"
True , but it was the first admission of progression to the idea of ready meals, and all guilt of bringing them to her flat and suggesting she tried this one looks nice and you like chicken casserole and a dumpling don't you ,Mummy! were dispelled  in an affirmation of good practice and common sense. 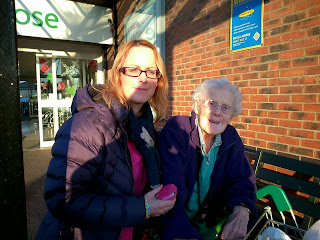 The children are p****d off with me for sharing all my concern about Mother on Facebook, and tagging them . They are embarrassed that I have had to share my daily trips on the train to Hull with them , their friends and my friends. I am sorry children. I normally blog , but have not had the time , and my smartphone is great but too small for  my thumbs and not fast enough for the data.