I am not going to use the official Jeanne today as I have had to for the past fortnight or so on official documents. She didn't like it, and she was no Marjory.

We have used the flat for all the last months. I know every bus between here and  Whitgift House, and Thackeray House. I know the way to the opticians in West Wickham, the Hearing Aid Centre in High Street, the Nat West in the Whitgift Centre and Wagamamas. Actually I think Jean might have quite liked Asian Fusion food , without onions of course .

Weekly trips from North Yorkshire to Croydon were not a chore, I have seen the countryside enfold and grow, have worked out how to get first class return tickets for £41  and above all have gone past the going to see Aunty Jean to going to be with Aunty Jean. I have known Aunty Jean since I came as a newly qualified teacher  to work in Battersea in the 1960s.  And yet , do you know, I did not know the spiritual wealth , the depth, the insight and the faithfulness of my cousin 4 times removed until I actually  stepped up a gear into the role we knew I would have to do eventually.

Staying in her lovely flat has been joy, noise of traffic and slow draining sink aside. It has been such an insight into the scientific mind  of  a FIBMS. It runs like a well ordered laboratory.There is just the right amount of equipment, placed strategically. It is pristine and maintained, the paperwork for the new Boiler is to hand,  and just enough cutlery and crockery and kitchenware to be functional without fuss. I know too that a systematic clear out has been going on for years, as Colin and I have been part of it  for the last couple of years, with our trips to Cherry Orchard Road  with the Royal Doulton ,on her instruction. (Cherry Orchard -If ever the name does not match the place these days).When Jean realised she would not be going back to the flat , she started conversations with 'What shall we do with my pictures of Switzerland? Who would like Mothers paintings? What are you going to do about the books? And so we had realistic  talks about strategy and logistics and got on with the job. We found hundreds of beautiful pictures  and slides of foreign holidays  ,Malta, Cyprus, Austria, France, but mostly Switzerland  and just binned them on instruction. 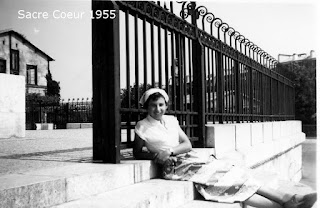 We have not had the heart to throw away the Girl Guides UK collection. I have kept  the Archive for some one else to bin. The Guiding Movement was a great source of joy , enjoyment and occupation , service and  companionship for Jean Jacobs. I expect her arrival to inspect a camp must have thrown many a stalwart Captain . I remember well how Stella of  the Dorking Guides didn't seem too thrilled when we told her that Aunty Jean , a Commissioner  from Croydon , might be coming to see Imogen and Alice  camping near Waverley Abbey in c19871!

I have thrown away recently, hundreds of printouts of Jeans own bloodtests. A funny thing to keep , except that now I realise just what a scientist she really was. I had no idea that Jean had worked for the Wellcome foundation in the 1950s on Cancer Research. No wonder she was always so interested in all the facts of the treatment my sister Sue received for Hairy Cell Leukaemia .Until ,that is, the new treatment in 2009  put her in remission after 26 years of chemo (DG). Jean always wanted to know all ones medical stuff. My aged parent tries to forget that her own social life seems to revolve around Dr This and Mr That ,and in hours of talking to her cousin on the phone ( mostly after 9pm) tried to turn the conversation to more positive topics. Here I really applaud my tenacious AP for talking Jean into applying for Attendance Allowance and trips to Burrswood.

Jean was not what she appeared.  She was a thoroughly modern woman. She embraced technology with aplomb, did her Finances by DD and was learning to up her Computer Skills.  I was working out that I would talk her into an ipad or Tablet as she adjusted to life in a Nursing Home, but the adjustment just never came or was even started.

Semper Fidelis is the best epitaph  for my much loved , quirky , and individual  Aunty Jean.   It is the motto for her old school Whyteleafe,  for ALWAYS FAITHFUL is just how SHE WAS, to her family, her friends, to her God-daughter, and to GOD.  RIP 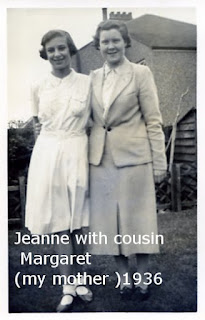 O Lord, support us all the day long of this troublous life,until the shades lengthen and the evening comes and this busy world is hushed, the fever of life is over , and our work is done.
Then, Lord , in Thy mercy , grant us safe lodging, a holy rest, and peace at the last, through Jesus Christ our Lord.

I found this prayer on a  worn card  amongst  Jeans Treasures.