A day at the seaside. 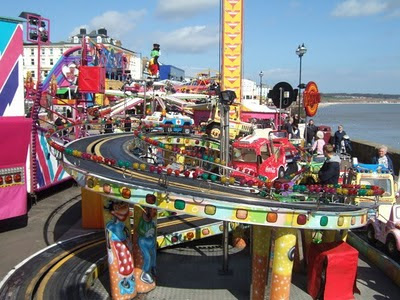 You will know that Bridteacher taught  in Bridlington , East Yorkshire for 15 years. I have known Bridlington all my life, as it is an easy car ride from my birthplace in Hull. I have had a fondness always for beaches of clean sand, and for me a summer day is always profitably spent sitting on one, near one,or  above one on a cliff with a book. I  love the sound  of the sea, the smell of the brine laden air, the prospect of the changing skies, the continually moving landscape afforded by the tides.
My  nurturing and childhood were informed and moulded by all that a seaside resort offered a post war childhood, and indeed a post war parent. My parents had not been able to enjoy a beach from 1939 until 1945 because of the defences, barbed wire, pill-boxes and mines that protected an island nation. I don't know whether the thrill of the Piers of places like Southend,Brighton and Cromer were viable during the war, but I do know that in Yorkshire today only that  Saltburn -by -the -Sea  remains. Post war trips to the coast for this child of austerity were magical , delicious and risque. Here is why
It seemed to me that fun though sitting on a beach was, it was the  vulgar stuff that appealed to the base nature of the child. Everything about Bridlington in the 50's, and 60's that I loved is still there now. That is why my parents only took seaside Holidays in select twee resorts like Sutton on Sea or Hornsea. They always said it was for the clean beaches, but I now know it was for the absence of 'kiss -me- quick'.
I remember when I was about 14 being terrified in case my mother found out the I had sampled 'Candy Floss' at Withernsea one afternoon.
So to Easter 2010. Tastes change as maturity brings honesty. A trip on the bus(with pass) to Bridlington for Bridteacher, spouse and two small boys beckoned as a way to spend the day that grandparents are privileged to offer. 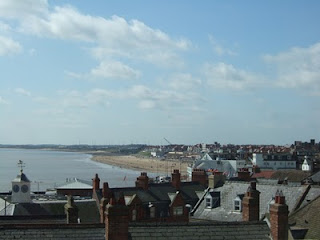 View from Bay View Cafe on Boyes 2nd Floor
Ill work backwards now.Spouse and I slept soundly for a long time last night. The Microwaveable Chinese meal for our dinner at 6pm last night was as much as I could have prepared.  Thank -you Imogen for supplying it when we agreed to have the boys for a night and day.The bus-ride back from Bridlington to Filey was very successful thanks to the benefit of hindsight, knowing where to sit.
The boys sat on the front seat on the top of the 121 Double Decker bus and loved every minute.  They entertained all the pass holders out for a ride, the caravanners going  back to Primrose valley and the shoppers  for every minute of the 45 min journey home.  The running commentary  3 and 5 yr old boys perform effortlessly ,and  'whats that Grandma?', and to each other about what they were going to do in the next fast bit, and especially the next hill could have been recorded for an essay on Child Development. It is a great ride. The hill from the Hunmanby brow down to Muston is as good as a fairground ride to a small boy.
I regress further. 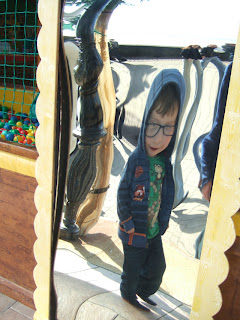 For several hundred yards along the traffic free promenade at Bridlington ,  you may worship at the Fairground shrines .Spouse and I recalled once again our austere childhoods where 'Common' was not done, but longed for by our inner children. So we did it with the boys, just a walk past it, with one ride worth every penny.It seemed a totally foreign place to us now we may have it but don't want it. 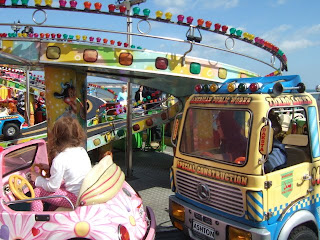 Before our stroll amongst the Las Vegas by the sea, where I had spotted several children I had taught over the years working the rides, we had a lunch at 11.45am.  We had been up since 5am , breakfast had been at 6 ish and the boys had been saying 'are we going to have a snack for 2 hours?'

BOYES for Good Value .
Never has the advert been so true.
The cafe on the 2nd floor of the Bridlington Shop (once Hammonds of Hull) is the perfect refined place for cheap lunch with 2 small boys.  Great chips, Tea in shiny pot , good china, perfect and attentive staff  and spotless loos-we customers of the North thank you. 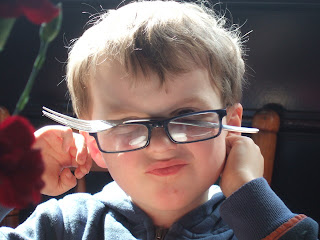 I am back at 11am now, waiting for 11.30 start to slow walk to lunch in Boyes. Spouse and I are tired already, after a disturbed night ,even tho the boys only woke a couple of times on their sleepover. We have been good grandparents, answered every question, been firm but kind, have remembered to offer frequent loo stops, have supplied very modest and tiny sweets.  We have realised that Bridlington harbour is fascinating to us but boring for Scarborian boys.We need a safe sit down. 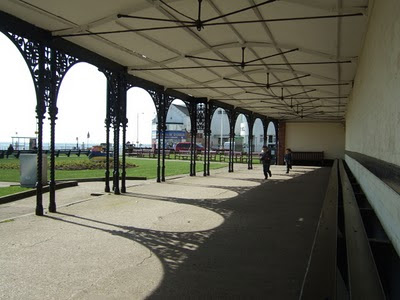 Never have I been more grateful for remembering  Victorian Ironwork, seaside benches and Shelters in front of the landmark Ebor Flats. We managed 15 mins here with the boys having race after race after race, and never tiring of them . Safe , empty, lovely view of the sea and harbour and right next to the Public WCs (very clean). Years of working in Brid were paying off.

The Journey to Brid had been frought with danger, and stress. The back seat of the 121 bus did not work. The boys were too hot, too talkative,'why are their no seatbelts?, 'why cant we sit somewhere else?', 'when will we get there?'.  I stupidly said the elder one could ring the bell to get off. Younger one was cross.The driver did the journey at 50mph all the way,10mls  over the potholes, down the hills, up the hills, round the corners or so it seemed.

We live in a more sedate Seaside Resort.

Yesterday I  was gobsmacked when the owner of one of our  specialist small shops here in Filey was less than discreet. She was not racist but Londonist if that will suffice for the word which means running down Londoners who spend a small fortune in your shop. I hope she is the only small minded trader here. I did tell her that personally I liked London,  and was married to a Londoner. It is good in  these days when children do gap years in Oz, honeymoon in Cuba, whalespot in the southern Atlantic and settle back down in Yorkshire that seeing the world gives a broad view of life . We took our little boys only on a bus trip for 10 miles. They need to start to understand the world they live in does not revolve around the one small place where they spend most of their time.

Filey has not got much in the way of Fairground delights, it has excellent fish and chip shops and small cafes like Bridlington. In fact, Filey is in a little time warp really, in that you can not buy fish and chips after about 6.30pm, it doesn't at present have any large shops or supermarkets. For some people that is its charm. It depends for its economy, like Bridlington on the purses of Day visitors and Holidaymakers, many staying on nearby Caravan Parks. Bridlington is much more worldly than Filey, has many more empty shops, even in fairly recent malls. It needs an economic boost . A good summer will really help.   We have not only miles of golden sand, but oh, ROCK POOLS, we too need a sun filled summer , to boost trade, fill the holiday accommodation, and revive that sheer joy which is a day at the seaside. 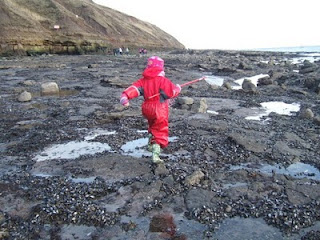