I am 63 years old. I felt at home when I went in to the Newsagents to get the Times this morning and recognized the  song playing on Yorkshire Coast Radio. So I said to Julie behind the counter'
'I know this one, this is where I came in!'  She gave me a dutiful smile. I was in Halls of Residence in 1965. I know every single one of every Beatles song . We all do . All the young people in college from 65 -68. In those days we had to show our Radio Licence to the Vice Principal before we were allowed to use our Transistor Radios. Mine cost 25 s and was a bright red Fidelity. I had never spent so much money on something not shoes before.

During 'O' levels and 'A' levels I had to do my homework in our Dining room, sitting around the table with my sisters doing theirs. We had to sit there. We were not allowed to be anywhere else, even in the summer when it was not cold and we could sit in our bedrooms. The Dining room was a prison of heat, from the Coalite, and fear ,of scratching the ancient mahogany table. We lightened the confinement with judicial use of the Wireless. The Home service was allowed, and the Third Programme, and Alan Keith  of the Light Programme. Not for us though . We had Radio Luxenbourg on low- 208 the Station of the stars.When we heard the sitting room door open announcing Mother on her way to see we were OK we quickly turned the dial to Allowable air waves.

I was looking after Reuben recently, 3 years old, whose favourite phrase is '..puter Grandma?'. It was after lunch, I was exhausted. By 10 o'clock I had done Playdough, Crayoning, the Ladybird game, walked round all the Filey shops and been to the budgies. By 12 .30 , (we had had lunch at 11.45), I suggested books and a story and must have dropped off. Reuben meanwhile had sneaked off the sofa, opened the laptop, booted up , logged on and found Poisson Rouge .

My point is that no one seems to  mind these days if their offspring use the available media. Cbeebies, CBBC, Milkshake are available all day for small  children. I know blue stockinged mothers whose babes have CD players strapped to their cots so the little ones can access a Story CD at bedtime.
I however at 18 had to learn the latest POP songs by Stealth. It is a wonder I ever got through my adolescence without being ridiculed, so strict were  my parents. My grandchildren by contrast are fully media-ed up at 3 years old.
So dear babes I am DOING THIS FOR YOU, I am showing you that I am in touch, and media-ed up.
I am not going to take it too far, my mobile is of the one piece variety. I do predictive text. I have just realised that the Digital Camera will do videos. I think I know what an ipod is. I certainly know what an iphone 3G S is because @Simon Rudiger has one, and I want one but realise I cant really afford the monthly tariff.

So in the next few days I am going to buy my very first Download. I don't have an MP3 player, at least I don't think I do, unless this PC is one. Anyway I am going to save History Maker to my hardrive, having paid for it properly, and then burn it to a CD as explained to me by @James Belshaw. Then I am going to give it to my young people who will love it and store it in their ipods or MP3 players   (I dont know the difference).
I haven't taken advantage of the generous offer/idea  of some Twitter friends to switch off my lights for an hour to save money /the planet because I needed the light to process this blog. 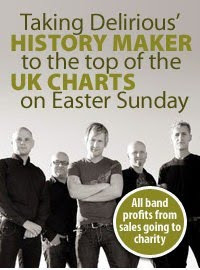