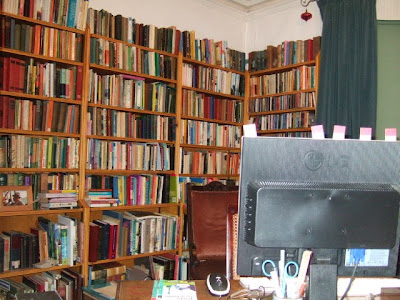 My 10 years as a bookseller , 40 as a teacher, 35 as a mother and 60 as a bibliophile give me the right to have an informed opinion about the Publishers Association's idea , also they say informed , and researched, to embed Age Guildance on the cover of Books marketed for Children.
I can see the future

When I was teaching 8/9 yr olds in Battersea in 1968 I read  the class 'The Magicians Nephew' and 'The Lion the witch and the wardrobe' (C S Lewis) and a mixed ability class had little  difficulty understanding the language. I read 'Danny Fox'(David Thomson) to 5yr olds in Surrey in 1987, 'Danny Champion of the world'(Roald Dahl) to 10yr olds , 'The Hobbit ' (Tolkien) and 'The Horse and his boy'(CS Lewis) to 8yr olds in Wimbledon in 1970. I read 'Silly Verse for kids' (Spike Milligan) to every child I ever taught, also 'He wishes for the clothes of Heaven '(Yeats) and most of the poems in Verse and Worse, (ed Silcock).
When I taught yr 6  in 2005-7 in Bridlington they could not understand the language of the Hobbit, or C S Lewis. My (Bright) English set enjoyed the Lemony Snicket novels. My 8yr old class in 2003 enjoyed Danny Fox, and my Special needs children aged 11 (Behavioural difficulties) lapped up Ahlbergs 'Cops and Robbers(over and over again), and 'Fantastic Mr Fox ' has been enjoyed by all age groups.
There is no such thing as the right age to read a book. A child alone will try a book and read on if they like it. A class group need something pitched  at the Group , but I have never believed that pitching at the less able learners gave the best' value ' to the group.   We  read Eothen by Kingslake , and A tale of two Cities aged 11, I don't think that would happen in yr 7 now, but I like to think Alex Rider Novels, Michael Morpurgo, Malorie Blackman, Paul Gallicos 'Snow Goose' would at least be interesting , and they may be read mostly between the ages of 8 and 14, but I would never put an age on them.

I think everyone should read 'Cold Comfort farm '. I finished it last night at about midnight. I simply could not put it down. I realised that when I read it last (when I was about 15) although I loved the story, most of the 'send ups' were lost on me. Similarly I love reading what children are reading . Chris our Filey Librarian keeps me informed. My son,has discovered the joys of reading in the last few years. His told me to read  Larklight. I loved it so much, and yet it is in the Childrens section of my local large Bookstore.My son is 31.

It has always been OK for children to Access 'Adult 'Non Fiction  '. Sometimes I prefer the Non fiction from the Childrens Section. The catagories Adult and Children will do for me.
Where I will put the graphic Novel of Franz Kafka's 'The Trial ' I know not, probably put a brown paper cover on it or hide it at the back of a shelf somewhere, as I do with books I don't want anyone to read! Everyone should at least look at the Graphic Novels  , and the Manga  comic books. Are they for adults? Are they for Children? I will promote anything that popularises the written word,of FICTION  which is for EVERYONE . I even think we should all have a copy of the Manga Bible, Ive given mine away already, must get another one.