Not quite the Fleche d'Or.

Great Railway Journeys I have done (4) 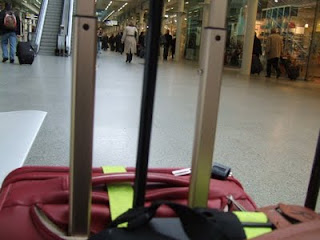 I enjoyed my first door to door  trip from London to Paris so much that I have been back for a second ride. The difference , or rather deeferonce is that now one leaves from that Greatest of all architectural experiences in London, St Pancras.

(St Pancras is especially venerated in England because Augustine of Canterbury dedicated his first church in this country to Pancras, a 14 yr old martyr who died for his faith in Rome in AD 304, patron saint of children ) Bet you didn't know that!

Spouse has always loved the building , as it was designed in the High Victorian Gothic style. It makes a wonderful start to any journey.  Here I make 2 provisional requirements. 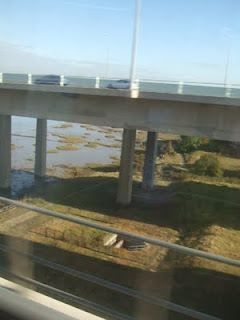 One of the joys of Eurostar is that you feel you are in an Agatha  Christie Novel. I think it because the liveried staff treat one with a pre-war courtesy .

The train goes so fast that taking photos from the carriage is just not worth it with my  digital camera. The scenery between London and the Channel Tunnel, and C T and Paris  is not worth mentioning anyway, and it is no wonder the train senses this in both directions, and hurries on. John Betjeman would have penned a great poem.This is the only good bit on the Kent side, some river estuary, Medway I think.

The 20 mins spent in the tunnel passes so quickly one hardly notices. I bought a cup(Cardboard ) of tea from the Buffet to time with the tunnel, and spent 20 mins wishing the milk tasted like fresh milk, but perhaps I picked the wrong plastic dose. 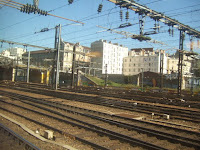 The scenery on the French side is slightly more interesting if you play the 'Spot the war graves game'.  I spotted about 6 this time, but they were passed before the shutter had time to shut . 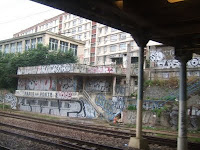 North Paris suburbs  look like any other European city. The Grafitti , however is in French, and has a look more Dufy than Banksy.
Once treading les rues and boulevards in the less desirable parts of Paris between Gare du Nord and Stalingrad (the french one, en route for La Villette) the Clapham Junction but neater charm of the rails all approaching the station is quite a sight. Now please don't comment that this is the Gare de L'est.  It is not, we were so tired after walking from L'Abbesses, via Sacre Coeur that we stopped on this bridge to pretend to each other that we could really walk all the way to Stalingrad, and in our reverie saw Eurostar next to the far right platform. 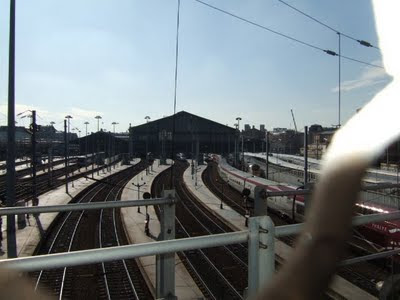