Felix Mendelssohn -his part in our life 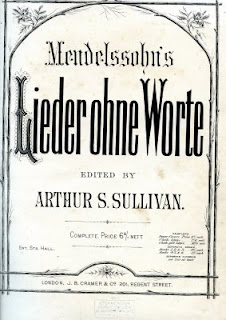 I have just listened to the Service on Radio 4 as I do every Sunday Morning before going to do girly music in St Oswalds.

I am a big fan of the blog of Bishop Baines who coined the words and set the hare running again (I saw a huge hare on the Wolds on Thursday, not 10 m from where I stood) . Simon Rudiger in the Filey Parish blog has done his usual 'get you think' provocative blog (sans capital letters), this time commenting about that article in the magazine 'Sorted' (Loaded Correctly) which suggests that men are staying away from church because the music is not macho enough.This may run and run , I dont care. My very own macho man loves flowers, a former LSO chorus member has a really eclectic taste in music, church or otherwise. Not like his narrow minded spouse.
I am listening to Elijah on BBC iplayer as I write, recorded last Friday.
"If with all your heart you surely seek me ,ye shall ever surely find me" is playing now.
When I am down, I always listen to this Oratorio, it hits all my highs and lows. The composer has managed to bring the Bible text alive for me. I am so glad that such a great Man of God as Elijah was depressed and anxious, successful at times and then totally lost enough to run away emotionally. Mendelssohn touches my soul with his understanding of the text in music, romantic and utterly serious.
Praise for this short lived genius has been mutated in to the genes of Bridteacher. Historically I come from a musical family. My great great uncle was an original Savoyard Charles Kenningham,, his brother Alfred a vicar choral at St Pauls, my own great ,great Grandfather Edmund Kenningham died after singing 'The heavens are telling" . Spouse always calls this 'The tenors are yelling."

My own Classical musical Education began with a trip to the City Hall Hull with my school Greatfield High School (Newton Hall) in about 1961 to hear my first orchestra .We were accompanied by the music teacher Miss Nottingham. This was the real thing and I knew it was. In the evening, this small group of us , in special cheap seats for the schools of Hull sat and took it all in, not even sure whether we liked it , but knowing it was grown up , and trying to find something in it to like. I was asked after which music I had liked best,out of the Short Overture, the long Symphony and the other shortish piece. I had no hesitation" 'Fingals Cave' "I said. It had entranced me . I have recalled this lollipop moment many times, and when my Father went to Sidney Scarborough's and bought me an EP of Mendelssohn Overtures, Fingals Cave on one side and Ruy Blas I played them so often I had to have more ,so joined the Music Library as soon I was old enough. I came home with Chopin one week, Liszt the next , worked my way through all the Classics, always dreading that moment back in the Library when the librarian checked all the LPs for scratches. Mendelssohn started me on my lifelove of music. I am open to anything from Sparklehorse to Anthony and the Johnsons, from Bach to more Bach via Mozart and Wagner. Oddly enough I don't like G and S despite my illustrious forbears. I have just found my Great-Grandmother Kenningham's copy of Mendelssohn's 'Song without words'. She was a gifted pianist and well known in musical circles in Hull in the 1880s and 90s. Her daughter , my grandmother Gertrude Alice Bruce was once visited by a famous musicologist of the day Dr Orlando Mansfield. The family anecdote goes that my grandfather was so shy that he didn't speak a word during the whole social call, and my grandmother never let him forget how he had embarrassed her.The fly leaf of the Folio Book is inscribed thus; 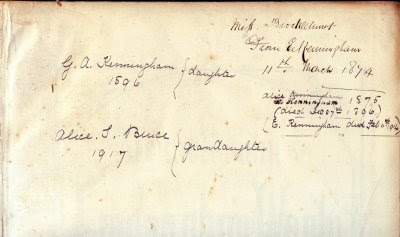 Listening to the service on Radio 4,this morning I am sure I heard the commentator say that Mendelssohn had been almost worshipped in his day. This obviously carried on for many years after too, for the Folio Book to have been used like a family Bible for the recording of ownership. So I am enjoying this Mendelssohn weekend on the BBC. Thank you very much. I am listening to 'Thanks be to God now'. I think it could be Macho Music, Elijah seemed a Macho Man,with the sensitive side that 'Girly's ' share. Does it really matter? Nick Baines doesn't think so and that's good enough for me!
Posted by Margaret Mary Rowling at Sunday, May 10, 2009